Ah, the pretensions of the intellectual elite. NEW from Princeton University Press, as advertised in the Chronicle of Higher Education: 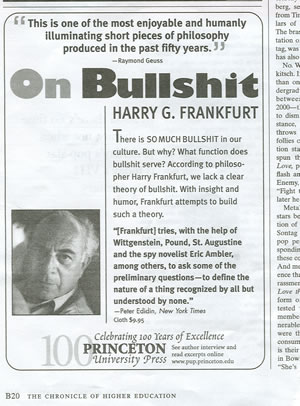 Here’s a sample from the first chapter of what “one of the world’s most influential moral philosophers” has to say about, um, manure:

. . .we have no clear understanding of what bullshit is, why there is so much of it, or what functions it serves. And we lack a conscientiously developed appreciation of what it means to us. In other words, we have no theory. I propose to begin the development of a theoretical understanding of bullshit, mainly by providing some tentative and exploratory philosophical analysis.

I shall not consider the rhetorical uses and misuses of bullshit. My aim is simply to give a rough account of what bullshit is and how it differs from what it is not–or (putting it somewhat differently) to articulate, more or less sketchily, the structure of its concept.

The “structure of its concept?”

Sigh. Wasn’t there someone, anyone, at Princeton University Press with enough class to tell everyone involved in this project that this pathetic, pretentious attempt to garner attention is merely juvenile and crass?

Oh, almost forgot to mention: Slate loved it. Of course. (Surprise! “The Bush administration is clearly more bullshit-heavy than its predecessors.”)

Well, surely not recommended here. But I do have a new section of recommended books on the left sidebar.