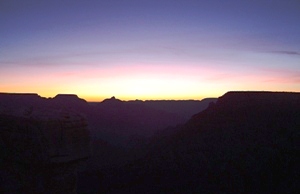 The alarm went off at 3 AM. Could we manage to rouse five tired children and make it to the sunrise service at the Grand Canyon 90 miles north? Having come this far on our westward adventure, we wanted to try.

But the Penta-Posse got themselves up, into the ski clothes we’d laid out to combat the cold, and beat me into the truck. (They may have been eased along by the chocolate and jelly beans the easter bunny left. . .) In fact, they were in such high spirits that they wanted our progress up Arizona Rt. 180 through the Coconino Forest to turn into a race with the lone hatchback we encountered along the way in the dark.

As the little car left us in his wake (Dad, c’mon, let’s go!!) Jack told the posse that we would let the hatchback “hit the cow” for us and tried to refocus their attention on seeing who could guess how low the temperature would go. The Dreamer “won” when the thermometer dropped to 17 degrees. I worried about the wind-chill on the canyon rim. Then, we crested a hill and came up suddenly on the hatchback, which was stopped dead in front of us as a herd of six or seven deer charged acrosss the road.

The mountains to our right, capped in snow, glowed with the reflected light of a full moon.

We reached the canyon at 5 AM just as the faintest light began breaching the eastern rim. We parked along the shoulder near Mather Point; the Dancer had fallen asleep again and didn’t want to venture into the cold — we wrapped her in a blanket and joined the others who were streaming in the direction of haunting music playing on a loudspeaker at the outlook. We were early enough to be among the first there; eventually around 1600 people arrived, filling up the platform, the stairs to the outlook, and lining the rim looking out over Mather Point.

The Dreamer, the Dude and the Diva scrambled up to a perch atop a large boulder, while Jack and I settled in to lower seats along a rocky wall with the Dancer and Boo.

By now, a faint pink light was spreading along the horizon. We had made it! My eyes filled with tears as my apprehension and tension from the press to get there was replaced with a sense of awe at the majesty in front of me.

Then the cold started to seep in. The Dancer started to cry. She settled in to Jack’s lap and buried her face in his chest. A little later, the Dreamer came down to take her so that they could warm each other. Boo slept on.

Half an hour left until the service and now the light was spreading and we could see the growing crowd around us more clearly. My worst fears about the wind-chill never materialized, but it was very cold. A stranger came over to the Dancer and the Dreamer, and wrapped them in a blanket. “Here,” he said, “you look cold. This is an extra.”

The service started and Boo began to cry. Then he settled quickly into my shoulder. . .

The sun broke over the northeastern rim with a brilliant glow, revealing the colors of the canyon in all their glory. Red, green, pink, orange. Deep clefts of darkness and shadow. The Colorado silently running in dizzying depths below. A raw wood cross on the edge appeared to hang in the air, silhouetted with the vast expanse of the canyon behind.

Hail, the Lord of earth and heaven, Alleluia!

Praise to Thee by both be given, Alleluia!

Who did once upon the cross, Alleluia!

Suffer to redeem our loss. Alleluia!

Afterward, the Dude and I stood and looked over the canyon. “This is awesome,” he said. 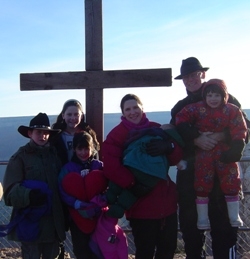