Messaging and Legislating. Stephen Clouse recently said that it is not enough to have good ideas, an advocate must persuade, must sell the idea. Frist knows how to sell.

Steve Rucinski was hosting Small Business Trends Radio yesterday with Dawn Rivers Baker. She was concerned that Congress was not addressing affordable healthcare for small businesses. And that our elected officials had legislation bottled up.

She was making sense. So Your Business Blogger decided to get some answers. And I always go to the top. Anita Campbell was out of town, so I had to settle for Bill Frist, MD, Senate Majority Leader.

The appointment was for 4pm. I arrive a bit early; punctuality is the courtesy of kings and all.

But I was prepared to be kept waiting. I made a friendly wager with the staff that the Senator would surely be running late. This is DC, you see. I was guessing that he’d arrive at 4:17. I am ready to be miffed — I am a busy man, very busy. The committee Senate staffer looks at me funny, and says, “Senator Frist late? I don’t think so.” She’s from Long Island; she should know late.

At 4:06 Senator Frist, a very busy man, walks in. On time. This is no ordinary event. 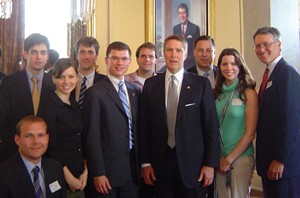 Your Business Blogger is joined in the Senator’s conference room with Dave Kralik from the National Association of Manufacturers, Steve O’Connor from Human Events, Larry Scholer from Heritage Foundation, Brendan Steinhauser from FreedomWorks, Mary Katharine Ham from TownHall.com, Ron Bluey from Human Events OnLine and John O’Hara from The Spectator and Ivy Sellers.

We get to ask questions. We ask Dr. Frist about health plans for small business. Dawn Rivers Baker said that this should not be partisan politics, but a simple, common sense policy issue.

The Senate Majority leader is an active proponent of Association Health Plans.

Frist said that the GOP will continue to win because they can “show contrast” comparing philosophies with Democrats. Frist outlined the values differences including the sanctity of life (except for embryonic stem cells); where Democrats embrace the culture of Hollywood. Frist has a simple agenda,

The differences between the GOP and the Democrats is “crystal clear,” says Frist. For example, the GOP supports the line item veto and will not support legislation that will hinder the small business.

Frist is also pushing for the Custody Protection Act. The bill makes it illegal for anyone except a parent to transport an underage girl across a state line to get an abortion. It has a strong, bipartisan majority. Senate Minority Leader Harry Reid (D-NV) with clever parliamentary maneuvering, stalled the bill.

The Democrats want the status quo. The GOP wants change. Republicans are the new [gasp] progressives.

From Senator’s Frist’s website (yes, he’s got a blog) we learn,

In the days ahead, we will further promote Health Savings Accounts …a common sense way for Americans to save money tax-free to help with their healthcare expenses.

We will also continue to lead the way on promoting Association Health Plans that sweep away burdensome state regulations and make it possible for small employers to purchase health insurance on the same terms as large ones.

And we will commit to developing a 21st Century system for the delivery of health care information that is ACCURATE, INTEROPERABLE and easily ACCESSIBLE.

By doing each of these things and more, we’re working to build a system that’s consumer-driven, patient-centered, and provider friendly — a system driven by knowledge, choice, and control.

So why do we, small business owners, not have Association Health Plans?

Senator Frist reports that the Democrats across the aisle are “obstructing events” to gain political points. Frist does not have 60 votes to bring bills to a vote. It is not certain if our deliberative body will deliver Association Health Plans.

But the good-guys will win. On the GOP energy bill, Frist feels, “fantastic…optimistic.” He wants to build a fence on the Mexican boarder. He wants to repeal the “Death Tax.” He wants all the tax cuts permanent. (The average household of four and $60K would see taxes increase by 58% if the tax cuts lapse as Democrats want.)

I ask Frist if the Democrats are holding up the Defense funding as a political ploy, or have lost the will to win. Frist said that the most important issue for his constituents back home in Tennessee is that they “want to feel secure.” Do the Democrats want to ‘cut and run’ in this war? Frist says that Pelosi certainly wants to “Cut and jog” away from winning the war.

Messaging and legislation. I also ask Frist, “Are we [bloggers] part of the messaging?” Because Frist knows the value of all media. And knows how to persuade and how to sell his message.

I dally in his outer offices after he leaves and see him on C-SPAN. Selling.

It is rumored that Frist sleeps but 3 hours a night. And keeps in his office an old filibuster couch that the senators would sleep on during real ‘hold the floor forever’ filibusters. Frist also keeps in the Senate Majority Leader’s office (which is a bit larger than my first apartment) a medical bag. He was the first on the scene at the shooting of Capital Police a few years ago.