January 14; The Bond of Michigan Fishing MANAGEMENT BY THE BOOK:365 Daily Bible Verse &One-Minute Management Lessons For The Busy Faithful

And we know that in all things

God works for the good of those who love Him,

who have been called according to his purpose.

The prediction: in 48 hours four out of five men would be dead or wounded.

The day before Normandy Invasion on June 5, 1944, General Eisenhower walked among the soldiers of the 101st Airborne Division. 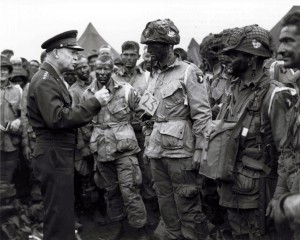 The Commanding General arrived unannounced to talk to the unit. Eisenhower’s analysts had calculated that these elite units would be facing an estimated 80% casualty rate. The troops would know the danger and could guess the long odds.

Eisenhower wanted to share some words with these men who were about to face so much that could go wrong on D-Day.

On the day before one of the greatest risks in history what does the Commanding General talk about? Combat battle loads? The effective range of weapons? Small unit tactics?

On the eve of this great battle Eisenhower chatted with the Greatest Generation about fishing in Michigan.

Yes, General Eisenhower would review the Order of the Day, “Full victory-nothing else.” He would talk about so much more. And so much less. The troops would be cheered. They knew they were loved.

Eisenhower often would talk about his ‘boys’ many who were teenagers, young men not far out of high school. He loved them. And they loved him.

The troops knew that the battle plans fit together for a purpose. A grand and glorious purpose: they had a vision of victory. They were willing to bet their lives on that love and vision.

The fog of war and ambiguity can slow accomplishment of the mission. But our mission can still find a path to success if our staff trusts us and loves the work. This is the definition of faith: That no matter the outcome we are doing the right thing for a higher purpose.

Victory can come to managers today in the same way battles were won in that previous generation: because soldiers loved Eisenhower and the mission.

True, the business leader best not be God-like. But our relationships should be modeled after the love and purpose demonstrated by our Heavenly Father.

As D-Day was being launched, Eisenhower said, “let us all beseech the blessings of Almighty God upon this great and noble undertaking.” He cast a vision for the young men – set out a “great and noble” purpose – and did so with love.

And we know that in all things God works for the good of those who love Him, who have been called according to his purpose. Romans 8:28