June 24; Women And Beauty: You Do Not Have To Be Perfect MANAGEMENT BY THE BOOK: 365 Daily Bible Verse & One-Minute Management Lessons For The Busy Faithful

“Haven’t you read,” he replied,

“that at the beginning the Creator

‘made them male and female,’ ” 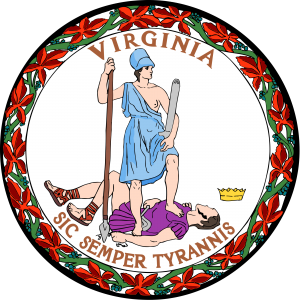 Seal of the Commonwealth of Virginia

“Biology may not be destiny, but it is a co-conspirator,” apologies to Sigmund Freud.

She had her right breast removed. “It got in the way half the time anyway,” she thought.

It was reasoned to be an efficient surgery to get her on to Real Life.

She needed it to be gone to really live and to do her job.

How else could she pull back on a bow-string or throw a spear?

The ancient Greek myth of the Amazon woman warrior is said to have her womanhood mutilated in order to be the perfect soldier. Legend has it that women would amputate their right breasts to more accurately draw a bow to allow clearance to aim an arrow (as well as a man).

The robed female “Virtue” on the Virginia commonwealth seal shows her exposed left breast but covers her right side—perhaps hiding the scar as she stands over a fallen king.

Is this female (dis)figure of Virtue still the best picture of women today conquering workplace tyranny?

Must women be made less of a woman; less of a lady in order to lead?

No. This is the popular feminist myth of management. Women do not have to be like men to succeed. (We guys can hardly get it right either.) Women only need a reminder of a few basic principles universally ignored by all genders.

The basics that are shunted aside until some disaster or tragedy forces new behavior and new skills as a condition of continued employment as a manager. Something that will get the novice manager’s attention.

The male can get fired and lose his job.

Or the female can get cancer and lose her breast.

Can a woman learn to manage without getting fired from her job or burned by chemo?

Both of these events can force us to re-evaluate how we manage. Women have an “advantage” in the near death experience. Cancer and chemo force women to delegate. She does not have the time or energy To Do It All as she did B.C., before cancer.

Yes. The First Lesson for a manager is to understand the difference between the Individual Contributor and the manager. Do not attempt to be perfect in looks or in ‘performance’ as our culture commands.

The best manager is one who doesn’t do everything exactly right – she does the right things. However imperfectly.

A “Perfect 10” might be a good rating system for women or models in a movie, but not for women in management. The perfect Jenny Hanley played by Bo Derek is not a decision maker. She is an object. Being perfect in management is actually a problem.

The manager can be—and certainly must be—less than perfect and still be a superior player.

“Haven’t you read,” he replied, “that at the beginning the Creator ‘made them male and female,’” Matthew 19:4