October 4; The Best Indication of Future Performance Is Past Performance MANAGEMENT BY THE BOOK: 365 Daily Bible Verse & One-Minute Management Lessons For The Busy Faithful

Whoever can be trusted with very little

can also be trusted with much… 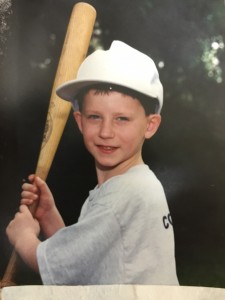 John Yoest
The Dude
circa 2000

John (The Dude) was five years old and stepped up to the plate for his first at bat in organized baseball. The ball rested stationary on a plastic rod. He took aim, made the swing, kicked out his right heal, turned his hips and connected with the ball. His career was launched in that T-ball game.

Your Business Professor as the #InSufferableParent was coaching near second base and watched as the little tyke ran clockwise – he ran to third base. No one had told him to run counter-clockwise. First Base, the first base he should run to, would be on his right. He didn’t know.

The rules in baseball, whither Little League® or Major League Baseball, are the same. For the little guys, the bats are smaller; the bases are closer together and fewer innings are played. The game is the same but on a smaller scale.

Recruiters hiring entry-level positions want new hires who know how to play the game. They will admit, quietly, that employers look for candidates who know which way to run the bases. And this usually means having had made a number of silly mistakes. Like running to third instead of first – everyone makes these mistakes. This is the only way experience is acquired.

Human Resource Experts look for even Little League experience for their Major League teams. They will consider less the job candidate’s grade point average than work-related experience earned as an intern. An internship is a program where a student works in a sub-entry-level position in an office. It is on-the-job-training to learn how to do a job.

(Internships are important, but The #AlertStudent will still strive to earn an A in Your Business Professor’s class. Of Course.)

The decision to get experience gives the hiring manager a reasonable rearview mirror on the job candidate’s track record. Where the best indication of future performance is past performance. This is the easiest to measure and verify through reference checks.

If the applicant has done it before then he probably can do it again. Experience is scalable.

John continued in baseball and pitched at the Division I College of William & Mary, Colonial Athletic Association Champion in 2016.