…Except for maybe that “whoring across Europe” part. 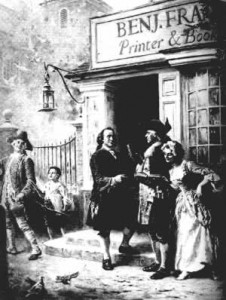 Anyway, Tom McMahon reminds us that this January is the 300th birthday anniversary of Benjamin Franklin. And they are celebrating in Philadelphia.

So I packed up wife and Penta Posse and headed to The City of Brotherly Love to check out the B F deal. 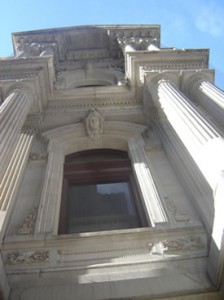 And perhaps learn a lesson for business.

It happens that Franklin and Your Business Blogger have a couple of things in common: we both started businesses; we both served in government.

But Franklin was able to cash in, well beyond today’s politico-turn-lobbyist-turned-consultant.

It appears that these two positions are connected with Franklin’s personal wealth generation. And the country profited as well.

Franklin’s printing press was dependent upon selling newspapers which were depended upon news from the distant colonies.

So Franklin set up a Postal Service to move mail. As the post workers traveled far and wide, they transmitted much more than letters:

Information. The Gazette got news. The colonies got mail. Franklin got Benjamin’s.

That funded Ben’s interest in kites and keys.

And the country was made a better place.

Visit The Strategy of Bingo. The Excitement of Chess.

Franklin never forgot that people act through self-interest. In his multifarious-and quite invaluable-schemes for public improvement he always attempted to gear public progress to private interest. For him, a stable, free, and progressive society required contented, hard-working, and optimistic citizens, and necessary to both goals was widespread prosperity.

Philly Future has a thought.

and Courage from the

Revolutionary War.
UPDATE: Jane Hampton Cook has a terrific new book. Her work was featured in a recent Newsbusters article. Fun read: Benjamin Franklin Would Have Made Smart Use of the Blogosphere.