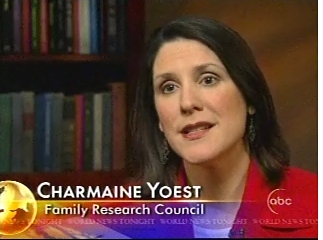 Charmaine recently was interviewed on ABC.

She was selling the most challenging type of product — an intangible.

If you are marketing with success and making a difference in your business, you will be in demand as an on-air talent.

Here’s a compressed check list Charmaine uses. It might be helpful for you for your big show-biz marketing break:

1) Talking points. John McLaughlin will not allow any of his guests to have notes on the set. But a pro doesn’t need them. Your talking points, your elevator speech, will be memorized. The broader the audience — the narrower the message.

2) Practice. (The other) Roger Ailes would evaluate a person’s likeablilty on camera by watching the performance on the TV. With the sound off. Ailes says that if, as he watched, he caught himself standing up to turn up the volume, he knew he had a client he could help. Most business marketing performances — presentations are learned, practiced behaviors.

3) Pre-interview. This is your audition where the booker/producer will run you through your paces. They claim they are looking for competence, of course. But this is show business — the producer is looking for entertainment. Are you personable? Are you likable? And can you still fit into the booker’s box. Remember, televised media is similar to print media reporters: the story is already written, already in the can. The writer or booker is merely looking for quotes. That’s why they’re called talking heads.

4) Logistics. Ask for the network to arrange for a car. Don’t burden your staff with driving — and directions. Pros show up with their own IFB’s.

5) Coach in Your Corner. Take your peeps with you — your entourage. This will give you a chance to practice your opening 8 second sound bites. Andrew Dice Clay would show up — joking and smoking — with his wife(!) two kids, publicist, agent, and assorted strap hangers. The driver and dogs remained with the car.

6) Non-answer. You Don’t Have to Answer Questions. Especially if the segment is taped, you answer the question with the answer you want to convey. Your message.

7) Time. The appearance is time consuming. Charmaines’s gig on Friday took up half a day. Here are numbers down the funnel:

25 minutes for makeup and mike-up

8) Cost/Benefit. Gore Vidal once said, “Never turn down a chance to have sex or to go on TV.” But it might not be worth it. (The TV part, I mean.) Only agree to an appearance if you can advance your agenda or as an expert witness. There are some debates that cannot be debated. Or that you should not touch — outside your expertise or the interests of your company. There are a number of other topics that Your Business Blogger dare not put in print. And you never discuss in a short forum. Email me before you go on-air.

9) Feedback. Ask the producers and bookers how you did. Get a beta copy of the show or have your tech guy capture a digital copy. Get — no — demand, honest feedback. There is always something that can be improved.

Also see the how to on media appearances. And another example of doing it right.

Charmaine blogs at Reasoned Audacity. Bio at the jump.

Dr. Charmaine Yoest is the Vice President for External Affairs for the Family Research Council [Currently the President and CEO of Americans United for Life] and Project Director of the Family, Gender and Tenure Project, at the University of Virginia, a nationwide study focused on parental leave policy funded by the Alfred P. Sloan Foundation and the Bankard Fund. Beginning her career in The White House during the Reagan Administration, Charmaine is an author and political analyst conducting in-depth research into social and family policy issues.

As an expert on domestic social policy, Dr. Yoest has provided Congressional testimony before both the United States House of Representatives and the Senate, as well as testifying before the New Jersey State Senate, the L.A. County Board of Supervisors, and the Virginia State School Board. She is the co-author of Mother in the Middle, an examination of work/family and childcare policy, and she is currently working on her next book, Empowering Shakespeare’s Sister: The Politics of Parental Leave.

Dr. Yoest has been an Instructor at the University of Virginia, teaching Politics and the Family. And, as a recipient of Mellon, Olin, Bradley and Kohler Fellowships, she has done work on tax policy, child care policy, welfare reform and gender and the welfare state.

As a political commentator, Dr. Yoest has appeared on all of the major networks and cable outlets, including NBC’s Today Show; ABC’s World News Tonight; CBS Evening News and CBS This Morning; MSNBC; Hardball with Chris Matthews, The NewsHour with Jim Lehrer; CNN’s Crossfire, Headline News, The Jesse Jackson Show; McLaughlin’s One on One; Technopolitics with Jim Glassman; C-SPAN’s Washington Journal and was a regular guest on Politically Incorrect.

In print, Charmaine has been published in the Wall Street Journal, The Washington Times, The American Enterprise, The Women’s Quarterly, and has been a guest columnist several times for USA Today. She is frequently quoted in publications such as the The Chronicle of Higher Education and the Congressional Quarterly Researcher. She was also the editor and co-author of Free to Be Family: Helping Mothers and Fathers Meet the Needs of the Next Generation of American Children, a compendium of research on major policy issues affecting the family which received extensive media coverage in print and by news programs such as the MacNeil/Lehrer News Hour.

Previously, Charmaine served as a Contributing Editor at Policy Review. She also served as Deputy Director of Public Policy for the Family Research Council, where she was responsible for policy development on family formation and women’s issues. This included work on welfare reform, education, child care, adoption and poverty issues.

Charmaine has a Ph.D. and an M.A. in Politics from the University of Virginia, and a B.A. from Wheaton College. She also did graduate work at Oxford University in Ethics and Philosophy. She and her husband, Jack, are marathon runners and live with their five children in the Washington, D.C. area.

Nominated for the Bradley Prize, $250,000 for “civic and intellectual achievement.”

Andrew Mellon Fellow, Department of Politics at the University of Virginia. Author of Mother in the Middle, an examination of work/family and childcare policy.

Project Director of the Family, Gender and Tenure Project, a nationwide study focused on parental leave policy funded by the Alfred P. Sloan Foundation and the Bankard Fund.

Lectured at the University of Virginia, the number one ranked public university in the nation as rated by US News and World Report, 2002.

Editor and Co-author of Free to be Family managing 21 contributing editors and staff.

Had a desk in the (real) West Wing in The White House during the Reagan Administration.

Provided Congressional testimony before both the United States House of Representatives and the Senate.

Taught Politics and the Family at the University of Virginia.

Serves as an advisor and consultant to business, academia, policy makers and political candidates.

Has appeared on all of the major networks and cable outlets.

Interviewed on over 500 radio programs.

Completed graduate work at Oxford University in ethics and philosophy.

Worked as an editor, contributing editor, columnist, and speech writer.

Served as a White House intern.

Served on a number of boards and commissions.