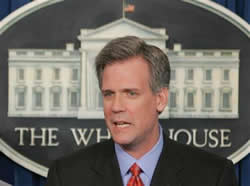 Here is the headline on Drudge today:

Tony Snow: ‘People blast me because I’m too squishy…’

Tony’s (rare) mistake was forgetting that the human mind cannot process a negative. Readers will only remember that Tony Snow is squishy.

Bimbo comes from Merrie Spaeth at Spaeth Communications who developed this concept. Based on Fawn Hall’s difficulty while working at Oliver North’s office. And her denial before the press:

Maggot infested press jackal: Are you a bimbo?

Radiant, lovely Fawn Hall: No. I am not a bimbo.

So what does the world remember? Fawn Hall is a bimbo.

Richard Nixon is another example, “I am not a crook.”

What does the world remember? Richard Nixon is a crook.

Repeating back a negative? Methinks the Lady doth protest too much.

Now. A good marketing campaign can turn the Bimbo to advantage. A Reverse Bimbo.

As in Thank You for Not Smoking,, by Christopher Buckley. (Another conservative!)

Buckley, son of William F., parodies the brilliant tobacco marketing mind. They know that the brain will only compute, 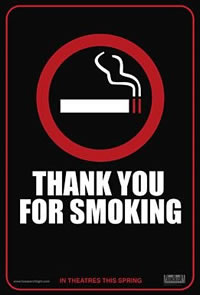 That’s not so bad. The words are helpful. And compliant with the Surgeon General. But they communicate the opposite of the stated wording. Good marketers know this.

Knowing Bimbo’s will help you change your life. Even with your kids.

Remember how your mom would say, “Don’t forget your lunch!!!”

And all your little head could handle was “Forget your lunch!!!”

And obeying mom, you forgot your lunch.

From this post forth, always remember to frame (life!) in the positive.

To, “Remember your lunch.”

Full Disclosure: Mom used to work for Tony in the White House. It kept mother and daughter out of Nordstroms.