Scars Are Tattoos With Better Stories

Your Business Blogger never quite trusts a man until I know a bit of his story; his road traveled; his pain.

In college I volunteered for the local Civil Air Patrol. The unit was run by Raymond Francis, who owned a business making prosthetics. Artificial limbs.

“Losing a limb always changed people,” he said. ” Not just physically. They either became the best person in the world…or the worst.”

Charmaine blogged on life changing pain when we traveled to the Air Force Academy last year.

These last few weeks have been ones of death and dying; a month of contemplating the purpose of pain and the meaning of suffering. It is a time for revisiting places of meditation, pondering the spaces man has devised for grappling with the eternal questions of mortality.

The famous chapel on the grounds of the United States Air Force Academy nestled at the base of the Rocky Mountains is more truly a cathedral. Outwardly, it is all sleek silver-wing metal, with seventeen external buttresses, knifing severely skyward. Designed to evoke an air-frame, the architecture does not immediately summon spiritual devotion.

But cross the threshold, step inside, and one is transported to another plane. The solemn air is bathed in the soft splendor of muted light. While the stern steel silhouette dominates the external view, the interior reveals the fragile panels of stained-glass that the harsh ribs support. The intricate glass panes filter and animate the sunlight, illuminating the sacred space with almost a visual hush.

At the front of the chapel, a single row is roped off. “Reserved” the sign says, for all the United States aviators who are missing in action or prisoners of war. The only occupant of the pew is a single, burning candle.

“Greater love hath no man than this. . .” reads the plaque. The Scripture it alludes to concludes: “that a man lays down his life for his friends.”

My thoughts immediately fly to my boy, my sweet Dude, who wants to be a fighter pilot. And baby Boo, who will almost certainly want to follow his older brother. My heart blanches. How could I bear it? And yet so many other mothers — gold-star mothers — even this very day, must find a way when their sons have given the last measure of devotion.

The war in heaven, and its reflection that we see through a glass darkly, is one of the great mysteries of human life. The existence of egregious earthly evil is incomprehensible. . . yet for every act of aggressive hatred is its spiritual foe — the love of humans one for another that confronts and overcomes all would-be destroyers.

At the back of the chapel, a Lucite case displays a picture of a little boy who was “Cadet for a Day.” In a series of three pictures, we saw a grinning boy, sitting in a cockpit dressed in a flight-suit, surrounded by a smiling corps of cadets.

My husband was drawn to the display immediately, wanting such a grand experience for the Dude, our own boy.

Down at the bottom of the picture, however, in small type, the caption read:

Where are the answers? Why must the innocent suffer? The vast, vacant space of the chapel responds with a twilight hush.

I don’t know if Tom McMahon has any tattoos. (He won’t share, if he does. A Gentleman.)

But I know he’s got a better story.

Make Tom McMahon a part of your daily reading.

We’ve been listening to the latest album from Rascal Flatts. There’s a hidden track on the album about a girl named Sara Beth. The Penta-Posse had me listen to it; they knew it would make me cry.

The song tells the story of a teenage girl who is fighting cancer. “Sara Beth is scared to death,” but most of all, she wants to go to her prom. But “it would be a mistake for someone to take, a bald-headed girl to the prom. . .” Wouldn’t it?

And she dreams she’s dancing

Around and around without any cares

and her very first love is holding her close

and a soft wind is blowing her hair

It’s quarter to seven, that boy’s at the door

And her daddy ushers him in

And when he takes off his cap

They all start to cry

Cause this morning where his hair had all been

And they go dancing, around and around

And her very first true love is holding her close

And for a moment she isn’t scared.

“Do kids really get cancer, Mom?” the Dreamer asks.

Confronted by pain, hearing the inner cacophony of fear and sorrow, we search longingly for answers. Into that void, art whispers.

The soaring height of the chapel-cathedral is designed to draw our eyes forward and upward. Suspended at the apex of the sanctuary, the culmination of our contemplation, hangs a cross. Silent testimony to love without measure. 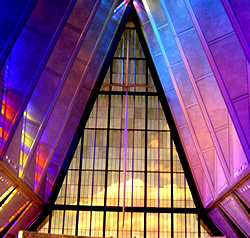 The glory of a cathedral, the pathos of a song — they speak to a truth beyond reason that we can only intuit, only feel in our hearts, only really know in our souls.

We don’t know the full answer to the question of suffering. But we do know that our humanity rests in our response to it.

We tend to focus on the one who is walking through the valley of the shadow of death, that’s where we follow the narrative. But the story is equally about the boy, the one who loves enough to shave his head for Sara Beth.

He’s scared to death, too.

Our recent travels took us to the Petrified Forest. I remembered visiting there as a child, and wanted the Penta-Posse to share my wonder in the phenomenon of wooden logs turned to stone. They are astonishingly beautiful. Petrification happens when minerals seep into dying wood, and replace the decaying organic material, leaving a solid, brilliantly hued stone.

Looking over the vast spaces of Arizona desert, covered with petrified logs, I suddenly realized I was standing in one of nature’s graveyards.

In the logs remade into rough jewels of reds, yellows, oranges, and purples, I saw an enduring monument to an infinite and redemptive creativity. I stood once again, in a chapel of God’s own creation, surrounded by nature’s stained glass. . . strangely and unspeakably comforted by decay that had been transformed into remarkable beauty.

“Scars Are Tattoos With Better Stories” From a Toyota ad June 3, 2002 in Sports Illustrated.