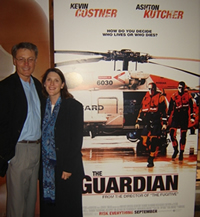 Your Business Professor and Charmaine at preview of The Guardian

The Coast Guard is Always Ready. But sometimes the Coast Guard must make hard choices. The conflict setup of the The Guardian action-movie is:

When a Coast Guard rescuer has to decide between two people in extreme distress, which one does he choose? 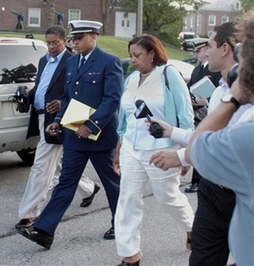 The Coast Guard has itself been under distress.

The service academies have precise rules as a condition of employment and as the price of admission for the free university education.

Don’t have sex in the dorms.

If you are looking for a Charlotte Simmons campus, go civilian.

The feminists and the academies are battling in the courts arguing over the breaking of rules and rape.

In the recent Webster Smith trial the Coast Guard recently had to choose between,

The Coast Guard picked, “She Said.”

Webster Smith was convicted guilty of indecent assault, extortion, sodomy, failure to obey an order and absent without leave. This is the first student court-marshal in the Coast Guard academy’s 130 year history.

With no DNA or forensic evidence in the case, prosecutors relied on the testimony of Smith’s on-again, off-again girlfriend to carry the rape case. (Emphasis mine.)

She testified that she drank two bottles of wine at a party in Annapolis, Md., last summer and couldn’t remember having sex with Smith.

Smith said that she drank far less that night and that the sex was consensual. He was acquitted on charges stemming from her accusations.

Both were a-boozing. She’s now an officer. He gets six months.

Hell hath no fury like a woman women scorned.

All this started with the girls getting mad. And then getting even.

The time line starts with Webster canoodeling with (at least!) four Coast Guard female cadets. This is against the rules for boys and girls alike. Webster should have gotten gigged or gotten demerits or something; So should the girl(s). But no.

About a year ago, the girlfriends began to find out about each other.

Real sexual assault must be addressed. Monsters who rape must be quarentined from civil society. I’m just not sure Webster is such a monster. Webster Smith is a cad(et) to be punished. But it is not clear that he is a rapist.

The next night, after the “rape” of #1, #1 girl goes with Smith to a concert, then she spends the night together with Smith in a hotel room.

#1 gets pregnant. Smith and his mother and #1 girlfriend talk about getting married.

They don’t get married.

Webster Smith is brought up on rape charges and all the other lawless canoodeling activity.

At his trial, girlfriend #2 testifies that she and Smith also had sex. A number of times.

The sex with girlfriend #2 took place in her dorm room. She opened the door and let him in. A number of times.

Girlfriend #2 says all this sex was “unwelcomed.” A number of times.

Girlfriend #2 joins Webster in a series of naked photographs; Paris Hilton special. (The Chronicle of Higher Education has the options, I believe.)

Girlfriend #2 is also now a Coast Guard officer. (It is not known if she is posing… for recruitment posters.)

#2 girlfriend gave testimony about oral sex with Smith. #2 said she had to debase herself with lots of sex, and porno-photography because Smith had a “secret” and would tell on her.

The secret would jeopardize her career.

#2 girlfriend sold sex for silence. To keep her “secret” safe.

Smith is befuddled. He knows of no “secret.” He really doesn’t know what she’s talking about. She implies that Smith does know. Or should know.

(Every married man reading this is nodding: has been there, ignored that.)

Somewhere in all this Webster’s baby is aborted.

Smith must register as a sex offender in Texas and will not graduate from the Coast Guard Academy.

The conflict, the lesson of The Guardian, of whom to choose, whom to believe, is simple.

Always rescue the damsel in distress. And,

What “She Said” is always true.

Webster’s “rapes” were not as bad as Professor Igor’s 80 “rapes” of a woman. The service academies are looking more like civilian academies all the time.

Full Disclosure: Your Business Blogger has the honor of serving as the Vice President for the Center for Military Readiness.

For an outstanding analysis about the service academy rape cases visit countervailing force.

More at the jump

Why are there so many movies about guys in the Marines or the Navy who turn their lives around? A couple of recent ones that come to mind include Men of Honor with Cuba Gooding Jr. and Robert De Niro and Antwone Fisher starring Denzel Washington. The latest in this growing little sub-genre is Disney’s The Guardian. News today that Kevin Costner and Ashton Kutcher have been cast to star in the movie.

In the movie, Kutcher will play Jake Cummings, a troubled young man who enlists in the Coast Guard in an effort to find his place in life. There, he forms a mentor-type friendship with a renown rescue swimmer (Costner) who’s hardened by the loss of his team from an accident years back.

Locations in Louisiana are currently being scouted for the film with an expected start date sometime in October. Andrew Davis (The Fugitive) will direct.

The Guardian Written By: