The Queen’s Previous Visit: A lesson in attention to detail 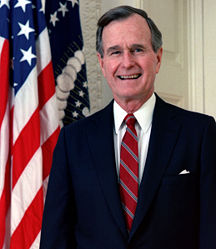 Attention to detail. The White House got it right this time with the Queen’s visit.

But perhaps not on her last visit here with George H. W. Bush. Your Business Blogger received the following from Alert Reader Bob Morrison,

“When George H.W. Bush [the first Bush — 41] welcomed the Queen to Washington, a bunch of us FRC staffers were invited to be part of the crowd of happy natives on the White House South Lawn. I was 30 yards away from the President, but could clearly see that the microphone had been left at the high position for the 6’2” Bush.

I could also see the red carpeted box inside the podium that was there, presumably, for the shorter Queen. Joseph Reed, the U.S. Chief of Protocol, was chattering away with Barbara Bush. I couldn’t yell “HEY JOE, THE BOX, JOE!” When the Queen came to the podium, the only thing visible was her hat.

The Washington Post had a field day. When she later spoke to Congress, she drily commented: I hope you can all see me now.

Two weeks later, in a little notice in the Post, Joe Reed was made ambassador to one of those troubled little countries where you wouldn’t want to vacation.”

If the White House has trouble with getting the basics right, goodness, do mere mortal middle managers have a chance?

Alert Reader Bob Morrison was able to anticipate, adapt and learn because he had almost made the mistake that Joe Reed had committed,

I saw the crash coming because I had been a junior protocol officer in the Coast Guard. I was talking to the Commanding Officer’s wife one time and almost missed standing for the American flag passing in review. When I saw it out of the corner of my eye, I shot up like a rocket. It was my duty to give the cue to the entire reviewing stands so I’d better not miss my moment. I got teased unmercifully by my buddies about being a super patriot then–and I still do!

Management challenges are not confined to government. This protocal reminder is a lesson for continuing education. According to a recent study released by Accenture and reported in Training and Development, 30 percent of middle managers worldwide from North America, Europe and Asia believe that their companies are “mismanaged.”

Which is why the American Society for Training and Development reports that 2006 saw over $109 billion in the United States invested on “employee learning and development.” Even board level leaders are continuing their continuing education tripling high-end executive seminar attendence.

The manager can improve his attention to detail and reduce screw-ups with a three P process:

The White House had all of the resources and equipment and the logistics ready for the Queen. But Plans are nothing; planning is everything. said Dwight D. Eisenhower. In the act of planning, staff will study and generate options and make recommendations — learning what might go right or, more important, wrong. Because something will always go wrong. The Planning looked good for the Queen’s speech.

But it is not known what rehearsing was done. Charmaine tells me from her White House days that the pace is so fast and brutal that a detailed dress rehersal was probably not done — time wouldn’t allow. And security would also complicate — the guys with ear pieces don’t like too many staff as stand-in actors moving about the stage before hand. A dry run is always needed for your business performance. Practice.

Praise in the after action report or evaluation is the most critical part of the learning process. The professional manager anticipates, adapts and learns — with his staff.

Pay Attention to Detail. Or you, too, will suffer the final, alternative P: Punishment — and be reassigned to some God-forsaken outreach of the org chart.

One of the first lessons I learned in the Army was to Praise in public and reprimand in private. See the Chief Happiness Officer for more on 4 kinds of Motivation.

Full Disclosure: Your Business Blogger is in league with the William Oncken Corporation presenting Managing Management Time: Who’s Got the Monkey?