On The Campaign Trail With Huckabee: The Dude’s Big Break 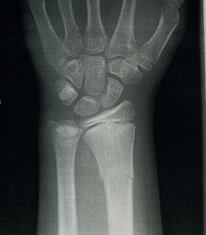 On the campaign (ski) trail Your Business Blogger has the rambunctious Penta-Posse on the road supporting Huckabee for President.

The one word answer,

And I would follow-up: “Nobody gets hurt.”

I can’t say that any more.

On the way home from New Hampshire I steered the Hucka-Truck with the Penta-Posse for a day of night skiing at Pat’s Peak.

Charmaine suggested that taking five children out on the slopes is a formula for trouble.

So. Under close parental supervision — meaning within cell phone range — The Dude and The Diva were doing a Double Black Diamond double time.

Their first run down the Diamond was slow, deliberate and measured in keeping with our family motto of Safety First.

Their second run was faster. The Dude took a jump, grabbed some air, ate some snow.

That was the only thing he ate that night. He took the pain like a trooper. Better than me.

I wonder about the coming physical therapy though… 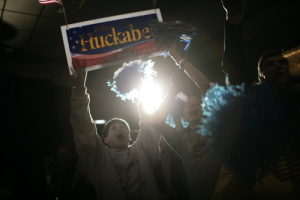 The Dude at the Huckabee
Iowa Victory Party

The Dude before his big break at the Victory party in Iowa
Photo Credit: Brooks Kraft from Time
###
Thank you (foot)notes:

Jeffrey Lovallo, MD, installed the cast. The Dude got the cast in black. In memory of the diamonds. No complications and the cast should be off in six weeks.

I asked if he could help us get The Dude on the field as a walk-on for the Redskins. He mentions some nonsense about how the NFL has rules on eligibility: a junior in college. But he says there might be an exception for homeschoolers…