Charmaine and Jonah at National Review both had speaking gigs at major schools.

I drove the wife and The Dreamer, The Dude, The Diva, The Dancer, and Baby Boo* down to Mr. Jefferson’s University so Charmaine could speak on women in leadership at Darden, UVa’s business school. The first thing we see are well-armed police.

I ask the sergeant about his job and the small gaggle of 150 women, “Crowd control?”

He looks me over. I’m holding a four-year old’s hand: I am not a threat.

I am the conservative.

His eyes return to the assembly. He’s looking for trouble.

I speak to one of the organizers about the number of attendees, the marketing of the event…the security. (Your Business Blogger(R) cares about such things; teaching Business at the Northern Virginia Community College. Where James Carville also taught.)

The event planner whispers, “We didn’t publicize the event…we weren’t sure who would come…”

Even though Charmaine spent ten years at UVA, earned her Ph.D. and taught (Politics and the Family) the organizers were fearful. Charmaine, a woman and a conservative who worked for Huckabee, Pro-Life, now a president and CEO of a law firm, might cause two horrors on the Campus Grounds:

1) A violent campus protest, or, worse,

2) A good conservative turn out.

The police were out in force to keep pie throwing liberals away from the conservative speaker. 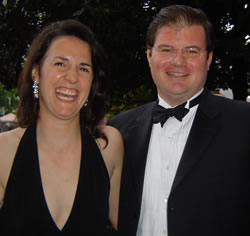 Or keep a woman from making a citizen’s arrest.

Or having a Democrat scratch KKK on our monster SUV, the Huck-a-Truck.

The police were there to protect us from the Brown Shirts with the party of death.

The police are on the side of law and order…so far.

We have been lucky with Charmaine’s public speaking in academia.

In a fashion, conservative Jonah has been lucky too. His speaking event at Emory was not publicized on the school website. He was not assaulted. He was ignored.

When he would rather have had a riot, I guess. (We guys like to think like this…)

A riot of ideas, please. But conservatives cannot get real “balance” in the academic setting. Goldberg writes,

It’s particularly odd because the majority of the time I speak on a college campus — even when debating a liberal — I’m told that I’m the first conservative they’ve had there for a while and that I was brought in for “balance.”

You’d think if that were the case, the various administrations would at least want some credit for providing equal time.

Even though, even a brief perusal of almost any college or university’s events calendar will quickly show that they could have the entire masthead of National Review speak month after month and it still wouldn’t equal balance…but the idea that simply inviting one or two objectively conservative speakers every couple years provides ideological balance is just absurd.

The joke is even bigger when you discover as I have at numerous schools that many professors tell their students they shouldn’t go hear conservative speakers.

Jonah Goldberg gets this right: students should get both sides of any debate.

That would be, well, Fair and Balanced…

* Alert Readers know our five children are also known as the Penta-Posse.