to the extent that it depends upon you,

live in peace with all men.

It has been called World War III. But it wasn’t a “hot” war like numbers I and II. It was named ‘The Cold War’ against the Former Soviet Union and lasted from 1947 to 1991.

Reagan won that war without using the Super Bowl-like Roman Numerals. The 40th president was often mocked as a war-monger: Ronald Ray-GUN. We won without a fight.

The world lived in comparative peace and the Berlin Wall came tumbling down with a shout not a bomb.

How did he do it?

The president used his powers of persuasion–his ability to influence other leaders and other countries to live in peace. As the leader of the Free World avoiding war depended on him.

In the 1986 Summit with the Soviet Union leader in Reykjavík, Iceland, Reagan determine that peace depended upon the strength of our Strategic Defense Initiative, also mocked as “Star Wars.” The president did not negotiate – he knew knew that compromise would not bring peace. Any compromise would prolong the Cold War. There was no deal.

Instead the Soviet Union collapsed while attempting to keep up in an arms race with the USA. Reagan was proved right. His influence worked.

The president followed Romans 12:18, If possible, to the extent that it depends upon you, live in peace with all men. 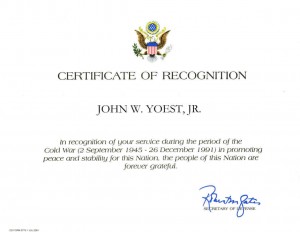 A few years ago, I received a very nice Certificate (suitable for framing) as a participation award for my limited military service during that troubled time, signed by the Secretary of Defense. I did not have to earn other medals, like, say a Purple Heart, because Ronald Reagan pushed his influence instead of pulling a trigger to avoid open combat.

If president Reagan can use influence to peacefully end the Cold War how much more can we do in our humble businesses?