April 17; What Makes a Wonderful Woman? Or a Man Wonder?; MANAGEMENT BY THE BOOK: 365 Daily Bible Verse & One-Minute Management Lessons For The Busy Faithful

She sees that her trading is profitable,

and her lamp does not go out at night.

Your Business Professor is forever having to correct students about academic prefixs: there is only one ‘doctor’ in my house—and it’s not me.

Husband, according to the Merriam-Webster Dictionary can also be a, “transitive verb: to carefully use or manage (something, such as a resource). 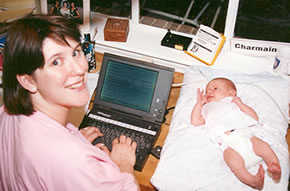 Charmaine with Hannah assisting on the Ph.D., circa 1995

To ‘conserve’ is also suggested as a synonym. To (this) Husband we were quite liberal. We spent a million dollars in opportunity cost over ten years for Charmaine to earn a terminal degree in political science. Then she worked on a presidential campaign. Now she is a president and CEO.

I would like to think that we–the royal–did it together. I could not be more proud of her—our—accomplishment. Dual careers require dual relationship management. But Charmaine still did the work. Her trading was profitable.

Sir Denis Thatcher, Margaret Thatcher’s late husband and I belonged to the same club. The Denis Thatcher Society. Denis would call Margaret “The Boss.” Real men have these kinds of relationships.

Kay Coles James is former Director of the Office of Personnel Management under president George W. Bush from 2001 to 2005. Charles James, Sr., is the husband of Kay Coles James. We both really, really married over our heads.

Denis Thatcher swore Charles James in, who then, in turn, swore me in.

Marriage is a management; a partnership of each others’ careers.

She sees that her trading is profitable, and her lamp does not go out at night. Proverbs 31:18.

The account is told of Bill and Hillary Clinton riding in the $300,000 Beast. The President and First Lady were being chauffeured in the large Cadillac armored car having returned to their old stompin’ grounds in Arkansas. They drive by a good ol’ boy pumping gas at the local filling station. Bill points at him and makes a joke, “Didn’t you used to date Bubba?” Bill Clinton smirks. “And now you get to ride in Limo One.”

Hillary looks out the window, “If I married Bubba,” she says without a smile, “I would still be riding The Beast. He’d be president…”

(What is left out of the joke is whether Bubba would have gotten his own sex-up Monica Lewinski intern.)

Hillary attained the position of Obama’s Secretary of State on her own merits. Her unfortunate management of the Benghazi murders on September 11, 2012 where a USA ambassador was assassinated and the resulting scandal only proves that failure is not restricted to a particular gender. Things a husband can help with.