May 23; When Should A Subordinate Talk Back To The Boss?; MANAGEMENT BY THE BOOK: 365 Daily Bible Verse & One-Minute Management Lessons For The Busy Faithful

Chapter Five: May Hiring; 23 May

Instead, speaking the truth in love,

we will grow to become in every respect

the mature body of him who is the head, 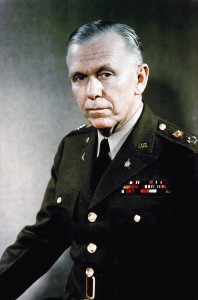 In late 1938, long before George Catlett Marshall had become chief of staff of the Army, he was part of a dozen senior government advisors to brief Franklin D. Roosevelt in the White House.

Direct debate was a key reason Marshall was promoted to chief of staff of the Army.

The assembled group was discussing the need to build 10,000 warplanes for the Army Air Corp. At the time the Air Corp had only 160 fighters and some 50 bombers.

(Before the Air Force was a separate branch, most war-fighting aircraft were a part of the Army. The Years later the Army Air Corp would be spun-off after WWII creating the Air Force branch of the armed services in 1947.)

Before the war President FDR would ask General Marshall what he thought of getting such an expanse of new resource war machinery. Roosevelt thought the Army General would be pleased.

The General knew that any military build up would require a balanced, logistical and infrastructure to support that many flying machines. 10,000 aircraft without the support of fuel, pilots, ground crews, hangers and training would be no more than idle inventory that would consume scarce resources and management attention.

Yes, managers should hire and reward devout loyalty but not rubber-stamping “yes-persons.” A smooth running team works best with friction and push-back.

Journalist Thomas E. Ricks in his book, The Generals: American Military Command from World War II to Today, describes how Marshall as the subordinate helped advance the goals of the country without being, well, insubordinate. Giving the top boss critical advice is seldom popular with neither managers nor staff.

The story continues with FDR and Marshall. The president was looking for confirmation from the general and asked, “Don’t you think so, George?”

[General Marshall’s]response was more direct: “I am sorry, Mr. President, but I don’t agree with you at all.”

Accounts by participants recount that a startled look came over FDR’s face and the conference abruptly ended.

Afterward, Marshall’s associates, who had been eyeing him in silence, once again came by to shake his hand and to offer condolences.

“Well, it’s been nice knowing you,” said Treasury Secretary Henry Morgenthau. As with the rest, Morgenthau made it obvious that he believed that Marshall’s bluntness had just ended his army career.

According to Morgenthau’s diary, Marshall, his face red and his temper barely under control, then asked the president for three minutes to speak. Marshall then passionately presented a warning about the threat faced by the dire straits of its armed forces.

“Did the president not understand the danger? Did he not understand that his inaction was putting the nation at risk? If you don’t do something,” he concluded, “I don’t know what is going to happen to this country.”

Two days later Roosevelt sent the program to Congress and the Congress soon after appropriated $900 million dollars for it.

As with any good decision, there may have been some office politics. The president may well have been persuaded by Marshall’s eloquence and presentation of the facts.

But Roosevelt might have been more influenced by the general’s convincing character and the need to keep this key leader respected by the president’s aids. War was going to come and Roosevelt was going to need Marshal’s active support.

Author Ricks concludes, “Less than a year later, FDR handpicked George C Marshall over 34 more senior officers to become the new Army Chief of Staff, a role in which he became the chief military advisor to the President throughout the war.”

President Roosevelt hired Marshall for the top job because the general could say, “no.”

Instead, speaking the truth in love, we will grow to become in every respect the mature body of him who is the head, that is, Christ. Ephesians 4:15