July 2; I Can Help You. I Have The Answer. You Will Be Saved. (Why Do You Hate Me?) MANAGEMENT BY THE BOOK: 365 Daily Bible Verse & One-Minute Management Lessons For The Busy Faithful

The whole city was aroused, and the people came running from all directions.

Seizing Paul, they dragged him from the temple, and immediately the gates were shut.

While they were trying to kill him,

news reached the commander of the Roman troops

that the whole city of Jerusalem was in an uproar.

Two thousand years ago whenever St. Paul preached the Good News of Jesus Christ we read that there would be one of two outcomes:

In either scenario a man’s heart would be pierced by The Word. A person would hear and hate. Or hear and be healed.

Not much has changed today.

Power is the ability to influence people to action. Sometimes the (re)actions to a powerful initiative are not pleasant.

The Gospel has life changing powers producing repentance or rebellion. But seldom apathy. It is not always pretty, but it is always predictable. Some men’s hearts will harden and close and some will be opened.

Entrepreneur and former Vatican Swiss Guard, Andreas Widmer, tells the story in The Pope & The CEO,

In 1988, shortly after the pope returned from a visit to Berlin, I was standing guard outside his private apartment when the future Pope Benedict XVI, Cardinal Joseph Ratzinger, stopped by for a visit. 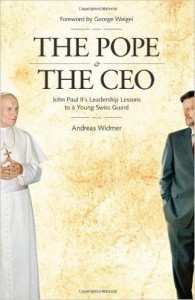 The cardinal had been with the pope in Berlin, where less than friendly crowds greeted them. Activists staged huge protests and launched eggs and tomatoes at the “popemobile” as it drove by.

While Cardinal Ratzinger waited for admittance to the rooms, I began to chat with him. He’s a gentle man, shy but friendly and sincere. That particular day I was curious about the reception Berlin had given the two and asked what it was like to be attacked as they had been.

“Doesn’t it bother you to have eggs and tomatoes thrown at you? Doesn’t it hurt your feelings?” I asked.

He smiled in his gentle way and explained, “ No, because what they’re throwing they’re not throwing at Karol Wojtyla and Joseph Ratzinger. If the two of us had never been involved in Christ’s message, they wouldn’t be throwing anything at us.

The tomatoes and insults are intended for what we stand for and what we proclaim. It is the Christian faith which has been handed down to us through the centuries. We can’t change that because it is difficult to live up to or doesn’t fit the current cultural trends. We should proclaim it in love, but it’s not ours to change.”

If you are not making a difference no one will care. You will only get push back if there is something solid to push back on.

We are called to make an eternal difference.

The whole city was aroused, and the people came running from all directions. Seizing Paul, they dragged him from the temple, and immediately the gates were shut. While they were trying to kill him, news reached the commander of the Roman troops that the whole city of Jerusalem was in an uproar. Acts 21:30-31