July 29; Anyone Who Aspires To The Presidency Should Be Disqualified For Lacking Humility MANAGEMENT BY THE BOOK: 365 Daily Bible Verse & One-Minute Management Lessons For The Busy Faithful

For everyone who exalts himself will be humbled,

and he who humbles himself will be exalted. 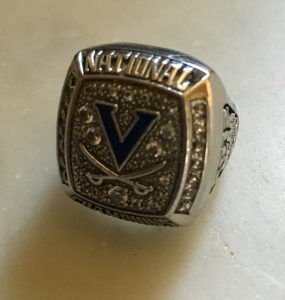 There are smaller Super Bowl Rings. And this particular ring is a petite size—for women.

Hannah would not wear it much. “It’s too big; too heavy.” And she is much too humble to wear it.

Humility has something that Your Business Professor is working on. (I will match my humility against anyone’s…)

It is said that real men wear their jewelry on their women. And that men are permitted only one piece of jewelry: a wedding band. Or maybe a watch.

But The Rules of Etiquette seem to make an exception for The Super Bowl Ring. Are there etiquette exceptions to aspire to high command and be humble about it?

Ken Blanchard, the cultural icon who developed and wrote The One Minute Manager, gives us a clue, “People with humility don’t think less of themselves; they just think of themselves less.”

One of the variables in determining who should be in management is the desire of that individual to be in the position of authority. The management candidate must first want to have the responsibility of getting organizational goals met through the active support of others. The person must want the job. The job qualifier is the desire.

But Douglas Adams, who wrote The Hitchhiker’s Guide to the Galaxy, notes in another book,The Restaurant at the End of the Universe,

To summarize: it is a well-known fact that those people who must want to rule people are, ipso facto, those least suited to do it.

To summarize the summary: anyone who is capable of getting themselves made President should on no account be allowed to do the job.

The desire for authority and managerial responsibility can be miss-directed. It is often said that there are two kinds of people who come to Washington, DC:

Fred Smith, the CEO of FedEx reminds us of this servant leadership, “People with humility don’t deny their power; they just recognize it passes through them, not from them.” These are the managers noted in (b) above. The managers who wish to do something have a story on the ‘why’ they wish to lead.

The Army has a standard response whenever a superior officer would compliment a subordinate. The junior would reply in words to the effect, “Thank you sir, I will relay your words to the battalion.” The officer accepts the kind words and doesn’t deny or minimize but understands that the influence and its power only passes through them.

The candidate for political office will often not be the first to voice the possibility that he could be president. Family and friends will encourage the candidate to form an ‘exploratory committee’ or to go on a ‘listening tour’ to determine the excitement of constituents who will then push the candidate into the race. To do something – not to be something.

Your Business Professor once owned a home in an historic district. It was a wonderful property. There was a pride of (temporary) ownership among us in the neighborhood. It was like a Patek Philippe timepiece (that is: an expensive wrist watch) advertisement, I never really owned the house; I was just getting it ready for the next owner. I was merely a steward.

The manager is the steward of her position. It is the team that wins. Not the individual.

The Ring is a National Collegiate Athletic Association (NCAA) Division One National Championship in women’s rowing for 2012. My daughter will not wear it. I wear it for Hannah. She did something. I am so proud of her.