October 30; Decide That You Cannot Control Everything MANAGEMENT BY THE BOOK: 365 Daily Bible Verse & One-Minute Management Lessons For The Busy Faithful

Trust in the LORD with all your heart

and lean not on your own understanding;

in all your ways submit to him,

and he will make your paths straight. 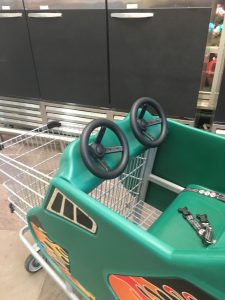 The little four-year old girl was at the wheel of a go-cart going around a track. About halfway through the ride she realized that her steering wheel was not connected to anything. Her turning the wheel did nothing.

The cart was on tracks. She was crushed.

Charmaine recounts with wonder some four decades later, “I really thought I was driving the car…”

I attempt to reassure and to explain how this is like life: her little car was on a predetermined route; built by an all-knowing craftsman; who wanted the best for her and where we only had the illusion of control.

In other words, was her car like Calvinism? Or was she just taken for a ride?

John Calvin, a French theologian during the Protestant Reformation, explained Biblical principles with five points. This faith flavor is usually practiced in Pro-Life Presbyterian denominations; with “predestination” as the short-cut slogan, or what Free-Will Baptists might use as a slur.

We will join together in love when we meet Jesus face to face. But meanwhile, there’s lots of theology to fight over.

Calvinism can be summarized with the acrostic TULIP. The five letters are known as the Five Points of Calvinism.

T stands for Total Depravity where man is dead in his sin and not merely sick. This is Original Sin manifest. The dead can do nothing; decide nothing. We were born in sin and are lost and wretched and need to be saved.

Your Business Professor once worked with a dear Catholic nun who did not care for the great hymn Amazing Grace. “I am not a wretch…,” she said with some concern. She was a saint and if anyone is saved it might have been her–but that doesn’t mean that salvation stops the Fallen Man from ever sinning again. If there is a Heavenly exception to policy, she would be it.

The opposite of this is a “Works Theology” that takes up the slack of Christ’s Passion on the cross and resurrection. The suffering of Jesus was not quite enough so I’ve got to do a bit more stuff to help out The Creator of the Universe. I will have to suffer some more: Spend some time in Purgatory. Or maybe New Jersey.

L starts Limited Atonement and tells us that Jesus did not save every man:

He wants his sheep not the goats. This is what Scripture refers to as the Elect, the Chosen; those whose names are written in the Lamb’s Book of Life; the Good-Guys. The Elect are known and picked out and chosen–Scripture is silent on the black hole of a negative elect.

I represents Irresistible Grace and reminds us that once we hear with comprehension God’s calling we cannot stop our movement toward Him.

Salvation is a gift that cannot be lost or returned. Once you’re in (if you’re really in) nothing can take you from the Hand of God. You could continue in sin that grace may abound, but, then you really wouldn’t want to.

I explain the parallels between her go-cart and theology and senior leadership. Charmaine ponders, builds up steam, then gets in high gear, “My little car was on rails on a path chosen by the builder. My eternal life was chosen by The Builder; and now I’m supposed to trust my company — to not come off the rails — in a predestined future?” She gives me The Look.

She says, “I do not understand.”

Indeed. And so scripture teaches us, Trust in the LORD with all your heart and lean not on your own understanding; in all your ways submit to him, and he will make your paths straight. Proverbs 3:5-6