August 4; Just Because The Manager Said It Once, Does Not Mean The Staffer Heard It MANAGEMENT BY THE BOOK: 365 Daily Bible Verse & One-Minute Management Lessons For The Busy Faithful

The reporters were bored. They had heard the same speech a dozen times. But segments of speech were still picked up and presented as news. Potential voters had “heard” the speech before, but then some finally heard the speech. 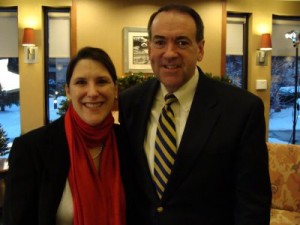 Charmaine was a senior advisor to Mike Huckabee during his presidential run in 2008.

Your Business Professor followed them about; driving the mobile-homeschool-truck with our five children.

We would watch the crowd’s reaction to Huckabee’s speeches.

Most of the attendees in the crowd were enthusiastic supporters, but occasionally a voter’s eyes would light up; a face would lift up and the message would be received and understood and, finally, heard.

Repetition and reiteration will catch the listener’s attention. This can be done in spoken communication but not so much on paper. Repeating a written phrase on a hard copy script will not work. What sounds melodious over the air to the ear, looks odd on paper to the eye. George Bernard Shaw said, “Tell’em what you’re gonna tell’em. Tell’em. Then tell’em what you told’em.”

But I repeat myself…

It’s your job to communicate your message, your values, what’s right about what’s happening, and what’s wrong — over and over and over again. There can be no lack of transparency. Everybody has to be on the same page. Even when you’re ready to gag over the message, you have to keep communicating it.

Just because you say something once, it doesn’t mean it’s going to happen. Too often, managers think, “Hey, I told my team what to do.” … But you also have to make it your mission to follow up — relentlessly — to see that things are moving in the right direction.

is the Lord God Almighty…

Alliteration helps the reiteration as when Julius Caesar stayed within the 140 Twitter character limit reporting one of his military victories, “veni, vidi, vici.”

I came, I saw, I conquered.

Willard Marriott, of Marriott hotels, tells us (again!) of the value of stump speeching,

“If you’ve got a grouchy room clerk, or…the waitress doesn’t say hello, you won’t enjoy your stay. And every time I make a speech, and I mean every time, I talk about these things. We want to help people—not only our customers, but the people who take care of our customers.” (Woolfe 2002)

Leadership takes an almost bottomless supply of verbal energy: working the phones, staying focused on your message, repeating the same mantra until you can’t stand the sound of your own voice—and then repeating it some more, because just when you start to become bored witless with the message, it’s probably starting to seep into the organization.

The professional manager will repeat a message until it is heard in the ear, then to the brain where it can be sounded in the heart.

As Revelation 4:8b repeats, …Day and night they never stop saying: “‘Holy, holy, holy is the Lord God Almighty,’ who was, and is, and is to come.”