September 29; Ownership Has Authority and Rewards and Costs and Power MANAGEMENT BY THE BOOK: 365 Daily Bible Verse & One-Minute Management Lessons For The Busy Faithful

Now it is God who makes

both us and you stand firm in Christ.

set his seal of ownership on us,

and put his Spirit in our hearts as a deposit, guaranteeing what is to come. 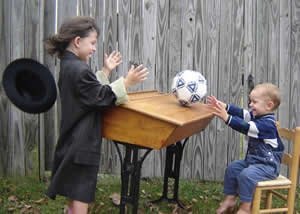 The ball must belong to someone.
Sarah and James share.

“You don’t have to share,” I am correcting one of three of our younger children back when they were reaching the age of accountability.

It is at a park popular with the neighborhood families. A group of the moms overhear me and are stunned, shocked at my heresy. One mother turns angry and has that look that says, ‘I am calling Child Protective Services.’ I am a monster.

My little ones look at me; a lecture is to follow. “Who owns the toy?” A child makes an uncontested claim and I address the owner, “You don’t have to share…” The proprietor gives me a look and clings to the toy and scrunches the shoulders.

I speak to my other two children while the other parents, making snorting noises, pull their children away. “That is his toy, that is his property and responsibility,” I steal a glance at the other moms. “He can do with his toy as he wishes.” I am making no headway with the other moms. They are communists.

The new toy-owner now has authority and allows his sibling to hold his possession.  He says, “You can play with it for two minutes.”

It is counter-intuitive. When ownership is established, the child is more generous because he can loan out his toy and know he can get it back whenever he wishes. He will share more, not less.

Our house rules were simple,

No child brings a toy into the house or is assigned any item until it is claimed and owned by the said child.

The owning child is responsible for the maintenance and security of the property.

Your Business Professor first learned of extreme private property in Managerial Economics, by Robert E. McCormick, my graduate school finance textbook. (McCormick 1993) Dr. McCormick, from Clemson University, credits Sesame Street Parent’s Guide by Katherine Hussmann Klemp. She wrote, “Give and Take: A Mother Teaches Her Children That Sharing Means Caring.” She advises, “The owner is not required to share.” (Klemp 1989)

Heather Shumaker echoes these ownership thoughts in her book, It’s OK Not to Share and Other Renegade Rules for Raising Competent and Compassionate Kids. She writes,

Child development experts, such as Dorothy Briggs (author of Your Child’s Self-Esteem), say young kids need to experience “owning” before they can share.

Ownership…could mean owning a stick or a pinecone found at the park. Ownership to a child is control over an object. This means he’s using it and he’s the boss. He gets to hold it and decide who else can touch it. Shumaker, Heather (2012-08-02). It’s OK Not to Share and Other Renegade Rules for Raising Competent and Compassionate Kids (Kindle Locations 1617-1621). Penguin Group US. Kindle Edition.

The socialist playground moms could be disciples of Unitarian minister Robert Fulghum. He sold over seven million copies of All I Really Need to Know I Learned in Kindergarten. He preached, “Share everything.” This makes life confusing and will not, of course, make the world a better place.

The manager will “own” the performance of his team. He will take the blame for failure. The only thing he should share is the credit when successful.

Now it is God who makes both us and you stand firm in Christ. He anointed us, set his seal of ownership on us, and put his Spirit in our hearts as a deposit, guaranteeing what is to come. II Corinthians 1:21-22