October 10; A Manager Steps In And Delivers MANAGEMENT BY THE BOOK: 365 Daily Bible Verse & One-Minute Management Lessons For The Busy Faithful

For if you remain silent at this time,

relief and deliverance for the Jews will arise from another place,

but you and your father’s family will perish.

for such a time as this?

Your Business Professor
(decades ago)

The Armor School was welcoming a new class. There were over 60 of us new lieutenants in the section and it seemed that no one wanted to be in charge. Officers who didn’t want to lead? Goodness.

The instructors asked the class for candidates who would want be interviewed for Class Leader. No extra credit; no rank; no compensation.

More work; no more money. (I didn’t know it then but this is how most managers start.)

There were a few who stood-up. I joined three classmates as the school cadre privately questioned us one-by-one. The Lieutenants were quizzed. As they left, I could hear them muttering, “I don’t know anything about class room formations or emergency procedures or…”

The largest factor in who is going to be a manager is that person’s desire to be in charge. A person has to want the job. The manager-to-be decides to stand up and step out. Even if others are in the position, the would-be manager will get off the bench and assert, “Put me in, coach.”

Many fear management because of concerns with making instant, flawless decisions. Decisions under time pressures and ambiguity and uncertainty and confusion.

General George Patton said, “A good plan, violently executed now, is better than a perfect plan next week.” The manager wanna-be must learn that he must step-up and step-in with a timely plan or he may be “violently executed.” It is better to be ‘good enough’ now than ‘perfect’ later.

Remember: Even a poor plan properly executed, is better than a proper plan poorly executed.

Even in the risky battlefield in the fog of war, the commanders keep moving, keep adjusting, keep advancing. Stuff Happens. Things Change. There is risk.

Jack Welch describes the Four E’s of leadership where the third E is for Edge, “the courage to make the tough yes-or-no decisions,” Welch also writes,

Look, the world is filled with gray. Anyone can look at an issue from every different angle. Some smart people can—and will— analyze those angles indefinitely.

Your Business Professor has a large poster of Ronald Reagan and George Bush in my home office. They are pictured at a podium with up-raised arms in victory. Large print across the top of the image says,

So. There I was, a Second Lieutenant, a newly minted Butter Bar and I ask for the work as Class Leader. I was a newbie who knew nothing, of course—I had been in the Army ‘all day’ as the joke goes; zero time in grade.

After the interview, I learned that I had received the appointment. I got the job.

I would like to report that I was selected because of my charismatic leadership and extensive knowledge of Army procedures; my military bearing and command presence.

I got the slot because I asked for it. And no one else wanted it. 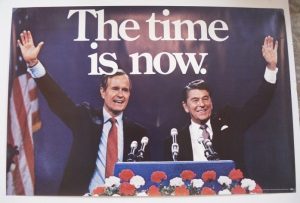 The Time
is now.

For if you remain silent at this time, relief and deliverance for the Jews will arise from another place, but you and your father’s family will perish. And who knows but that you have come to your royal position for such a time as this? Esther 4:14