October 21; It Sometimes Takes Discipline To Take No Action MANAGEMENT BY THE BOOK: 365 Daily Bible Verse & One-Minute Management Lessons For The Busy Faithful

and know that I am God;

I will be exalted among the nations,

I will be exalted in the earth.” 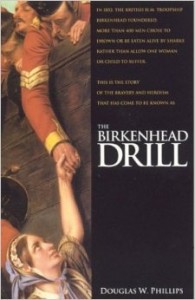 “Women and children first” was the command as His Majesty Ship (HMS) Birkenhead began to sink. The women and children lined up youngest to oldest, in “funeral order” as it was known in an earlier time.

The British Marines moved away from their dependents as these, the most vulnerable, made their way into the few lifeboats. There was not enough space for everyone.

As was the custom in the 19th century families often traveled with their military men when they were ordered to the far reaches of the British Empire.

Birkenhead was a troopship carrying some 643 souls from the British Isles to South Africa in the war against the Xhosa people.

At 2:00 am early morning on February 26, 1852, Birkenhead struck an uncharted rock and sank in twenty minutes off the coast of South Africa.

The lifeboats were being rowed away from Birkenhead while the soldiers and sailors remained on board.

Lieutenant Colonel Alexander Seton of the 74th Foot was in command of the military personnel. He knew that if the men were permitted to abandon ship they might attempt to reach the lifeboats. The boats would be swamped.

Lt. Col. Seton made the decision to do nothing. The men were drawn up into formation on the rear of the vessel as she went down by the bow. He commanded the men to remain quiet and still. None panicked.

The men remained in their ranks as the ship sank beneath them. Lt. Col. Seton drowned with his men.

Rudyard Kipling wrote in his poem, Soldier an’ Sailor Too,

To stand and be still

is a damn tough bullet to chew.

Leadership can involve life and death decisions. But these decisions must be executed by a disciplined team.

Birkenhead was lost. But not one woman or child. All of the women and children survived.