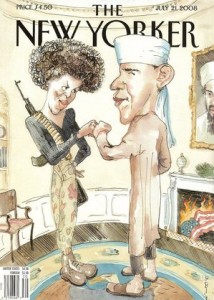 Michelle Obama and Presumptive Democratic presidential candidate Barack Obama
A satirical New Yorker cover cartoon depicting Barack Obama in the Oval Office dressed as a Muslim and his wife Michelle Obama as a terrorist. Though the cover has proven to be controversial, The New Yorker defends its view and illustrator and states that it is a satirical look at the scare tactics and misinformation being used to derail the efforts of Senator Obama’s campaign
New York City, USA – July 2008
Credit: (Mandatory): WENN