Major John Wesley Powell lost an arm in the Civil War, yet he went on to lead the first expedition that traveled the full length of the portion of the Colorado River that cuts through the Grand Canyon. The trip was so treacherous, and the river rapids so perilous, that the Indians warned Powell against even making an attempt to explore the Colorado. Nevertheless, he recruited nine other men and on May 24, 1869, the expedition party set off in three wooden boats.

One man abandoned the trip after the first month. Powell and the remaining eight men continued their exploration until they reached Separation Canyon. They faced a crisis: three men in one boat argued that it was foolishness and certain death to continue. After failing to convince Powell to join them, they left the expedition and began an attempt to hike out of the canyon.

They were never seen again.

The tragic irony is that the rest of Powell’s journey was not as challenging as that which they had already completed, and two days later they reached civilization.

Powell conquered the mighty Colorado River, with only one arm. Now that’s audacity.

All of life’s major achievements are accomplished by those who persist in the face of apparently insurmountable obstacles, and non-OSHA compliant work environments. On the other side, are the nameless ones whose foolish obstinence leave them and their followers lost in obscurity, or worse yet, immortalized in infamy.

Where is the line between reason and audacity? And when is it quitting too soon?

I kept asking myself this question yesterday as our western adventure took us to our own Colorado River: taking the Penta-Posse skiing.

In the past, we’ve skiied with our extended family, which raised the adult to child ratio to a more reasonable level. But, hey, how bad could it be? The Posse has always loved skiing, and Jack loves to brag that the Diva “skiied before she could walk.”

How bad could it be indeed. For the first hour there was nothing but crying, whining, complaining and bickering. And that was just me and Jack.

I wanted to go home. I wanted to give up the expedition and hike out of the canyon. When we took an assessment at the end of the day, all agreed that every member of the Posse cried actual real tears at least once in the morning. . .

But then came the afternoon. The Posse saddled up to ride. They were all over that mountain. Everyone also agreed (except for the Dancer who lost consciousness the minute she sat down, still with her crash helmet on) that the day was “awesome.”

Of course skiing is not quite in the same league of challenge as exploring the Colorado River, but I do hope the Posse learned something valuable about persistence.

What is the alchemy of achievement? It’s hard to know where the perfect union of reason and audacity lives. But I do know that in looking for it, you can quit too soon. 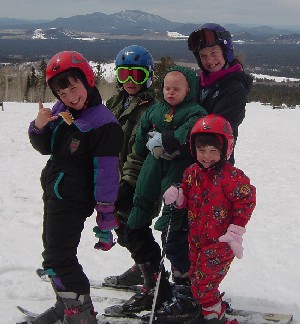