Who are you and why should I care? The First Rule in Referrals 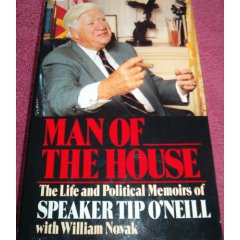 Man of the House:
The Life and Political Memoirs of Speaker Tip O’Neill

Tip O’Neill was a master politician. And people always wanted favors from the former Speaker of the House. Before a visitor would come a-calling, Tip would tell his staff,

“Don’t take nobody, nobody brought.”

Tip found it best to bestow favors only on the advice of a known, trusted third party.

The vector — the connector, would be known to both Tip and known to the supplicant. Introductions made. Wheels greased. The fix in.

The Irish know how to do these things. Tip O’Neill. Ronald Reagan. Chris Matthews.

Last night I was on the phone with Sam. He has a compelling case for not killing kids. With Down Syndrome.

Sam’s site is terrific. The flash demo will make you cry. Emotion sells.

But I didn’t know who Sam was. Or anybody that knew him.

How was my suggestion of any currency — donations, links, recommendations — going to reflect on my reputation? And the credibility of Charmaine and groups with which we may have some influence.

So I suggested to Sam that he name names. An informal Board of Advisors on his site. An easy avenue for due diligence beyond Googling.

People who could vouch for Sam. Who could provide connections to Sam.

Sam is now assembling a Board of Advisors.

(Unlike a Board of Directors, Advisors don’t need Directors and Officers insurance — however Advisors’ advice doesn’t have to be taken either.)

Sam is doing the right things — Which is Leadership defined.

Now Sam is doing things right — Which is Management defined.

For his son Gabriel. Making the world a better place.

What if you needed access to a ‘Tip O’Neill’? How would you get the appointment? A pro uses intermediaries.

More on Tip O’Neill at the jump.

A DC Birding Blog is hosting the Carnival of the Vanities for 22 Feb.

Tip O’Neill Biographer John A. Farrell neatly sums up the cultural chasm between Tip O’Neill, the Democratic Speaker of the House, and President Jimmy Carter as they eyed each other from opposite ends of Pennsylvania Avenue in 1977. “Carter put O’Neill and the others like him in the same category with the corrupt Georgia courthouse pols that he had been fighting for much of his life… and that he supposedly was elected to change.” And “Tip came from Massachusetts, where the ethnic wars over the years had been between the happy-go-lucky Irish and the very rigid, pious Protestants. He tended to lump Jimmy Carter in with his lifelong political enemies, who were the Brahmins of Massachusetts with their great rectitude and their great piety… and little appreciation for any kind of political larceny.” Despite their differences, the two Democrats knew they needed to work together if they were to get anything done. Though it was never easy, each tried his best.

A Lifetime in Government

For Tip O’Neill, becoming Speaker of the House in 1977 was the pinnacle of a lifetime of service in government and the Democratic party. Born in a working class neighborhood of Cambridge, Massachusetts, in 1912, the son of a City Councilman entered politics at fifteen, campaigning for fellow Irish Catholic Al Smith in the presidential election of 1928. While still a senior at Boston College, O’Neill lost a bid for the Cambridge City Council, but never forgot the advice his father gave him: “All politics is local.” Beginning in 1936, when he was elected to the State House of Representatives, Tip never lost another election.

After rising all the way to Speaker of the Massachusetts House of Representatives on Beacon Hill, O’Neill won the seat in Congress vacated by John F. Kennedy, who was elected to the U.S. Senate in 1952. In Washington, under the tutelage of fellow Massachusetts Democrat John W. McCormack, O’Neill learned the system and rose steadily through the party ranks. In 1967 his principled opposition to the Vietnam War startled many in his working class district, as well as President Lyndon Johnson, but gained him support among younger House Democrats. In 1971 he was named majority whip, then elected majority leader in 1972, a position he used to lead the fight against President Richard Nixon during the Watergate scandal. He was elected Speaker in December 1976, at the age of sixty-four.

Tip O’NeillO’Neill’s colleagues in the legislature comprised “a Congress that was feeling its oats,” notes John Farrell. “It had just kicked a president out of office… it had just ended the Vietnam War by cutting off funds. So, it had a lot of experience with presidents who thought they knew that they were going to push things around on Capitol Hill.” Enter Jimmy Carter, who had captured the White House in 1976 by running against Washington, and arrived bent on reforming a federal government he viewed as wasteful and slightly corrupt. In their first meeting, Carter told O’Neill how he had gone over the heads of the Georgia Assembly when he was governor. O’Neill replied that he knew 289 House Democrats who had run against President Nixon, “and they wouldn’t hesitate to run against you.”

Complicating matters was Carter’s ambitious agenda, which included welfare and tax reform, government reorganization, a comprehensive national energy policy — and a balanced budget by the end of his term. “Tip called in [Walter] Mondale and [Hamilton] Jordan, and he said, ‘Look, we’ve got to whittle this down. You got to give me the top four,” relates John Farrell. “So Jordan and Mondale sat there and they whittled the list down to four. They sent it in to Carter, and he added 12 back on to the list… They sent that back up to the Hill, and they said, ‘I’m sorry, Mr. Speaker, he wants it all.'” Over time, Carter did learn to prioritize, and with O’Neill’s help, built a solid legislative record. The best example is Carter’s energy policy, which O’Neill brilliantly shepherded through Congress using every political technique in his considerable repertoire.

Divisions Between Northern and Southern Democrats

Tip O’Neill The political fault line between northern and southern Democrats was revealed time and again as the White House and Congress tried to come together over the federal budget. Carter, a fiscal conservative at heart, was determined to lead the fight against inflation by cutting government spending. “And across the table is Tip O’Neill,” according to John Farrell, “the quintessential New Deal Democrat — unrepentant, un-reconstructed, and determined to follow the [Franklin D.] Roosevelt philosophy of tax and tax, spend and spend, elect and elect… and basically standing for much of what Jimmy Carter had come to Washington to change.” Still, Carter came to have great affection for O’Neill, appreciating his political skills and loyal service. And even though he was close to the Kennedy family, O’Neill remained neutral when Senator Ted Kennedy challenged Carter for the Democratic nomination in 1980.

Though Carter won the nomination, election night provided a fitting end to the odd political partnership. Ronald Reagan not only beat Carter in a landslide, but helped the Republicans recapture the Senate for the first time since 1952 and dramatically reduced Speaker O’Neill’s Democratic majority in the House. Though he had been begged not to, the president gave his concession speech before the polls had closed on the West coast, hurting several Congressional Democrats in tight races. “You guys came in like a bunch of pricks, and you’re going out the same way,” a furious Tip told a Carter operative.

While O’Neill may have shared more outward similarities with Carter’s successor, their political philosphies could not have been more different. As President Reagan led a conservative revolution to shrink the federal government, O’Neill defended the New Deal and Great Society programs he had spent a career building. While the Republicans skewered him as the living embodiment of the bloated, Democratic welfare state, O’Neill gave as good as he got, calling Reagan “Herbert Hoover with a smile,” and “a cheerleader for selfishness.” By November 1982, America was in the grips of the worst economic downturn since the Great Depression the nation had experienced on Hoover’s watch, and Reagan’s economic policies brought him the lowest approval rating of his presidency. In leading the loyal opposition into Reagan’s second term, O’Neill stayed true to the Democratic tradition he viewed almost as a religion (alongside his other faiths, the Roman Catholicism and the Boston Red Sox).

Jimmy Carter with Thomas ‘Tip’ O’Neill on Air Force One. Both are sitting facing each other. Tip has is hand on Carter’s shoulder. B/W Printed from the NAIL website.After ten years as Speaker, O’Neill retired in 1987, dividing his time between an apartment in Washington and a house on Cape Cod. “He was the Congressman’s Congressman,” said longtime rival Senator Bob Dole when O’Neill died in 1994 at the age of 81. “He loved politics and government because he saw [they] could make a difference in people’s lives,” remembered President Bill Clinton, “and he loved people most of all.”