A post from last year and the year before by Charmaine.

Every time we’ve made the left turn onto Eisenhower Drive, and passed through the imposing brick gates of Arlington National Cemetery, I’ve been overwhelmed with emotion. Family members of those buried at Arlington National Cemetery are given a special pass and may drive onto the Hallowed Grounds to visit the grave of their loved one. It’s an enormous honor which makes me feel humbled. 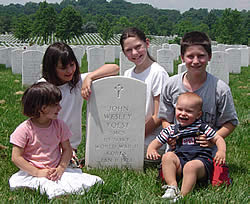 My husband’s father served thirty years in the United States Navy, and died the year I married into the family, so I didn’t know him well. And the fact is, after a lifetime of nine-month Mediterranean tours, wars, and rumors of war, there is a lot my husband doesn’t know as well.

However, over the 15 years that we’ve been married, I have gotten to know my mother-in-law well. She doesn’t talk either about the sacrifices she made, but there is one story that she has told me several times.

Once, when my father-in-law was out on tour, and she was home with three small children, the car broke down and, of course, she had to take care of it. My husband marched up and said, “Don’t worry, Mom, I’ll fix it.” He was about five years old at the time.

My mother-in-law laughs. . . the little man, takin’ care of things. But it makes me cry.

We owe a lot to our military families.

When we visited Arlington this past week, we passed at least three funeral ceremonies on the way to Section 64. I lost track of the fresh graves and the still-standing tents, either just vacated by other grieving families, or awaiting the afternoon’s fresh, raw sorrow.

As we pulled up on Bradley Avenue, an Air Force honor guard was marching precisely back to their bus after a ceremony for an airman who had been a POW in Korea. While we searched for my father-in-law’s headstone, an empty horse-drawn caisson lumbered past, and settled briefly in the shade nearby, awaiting their next assignment. . .

We found my father-in-law’s headstone: The front has the Christian Cross with the old Chief’s Curriculum Vita. Chief Yoest cut high school to catch World War II. He retired with rows of ribbons and a “v” device, and pinned butterbars on his boy. He now has a grandson, The Dude, who bears his name and wants to be a Navy pilot.

The reverse of the stone is blank, awaiting the inscripton for Chief Yoest’s high school sweetheart, his wife, Jack’s mom, “Babcia” (Polish for Grandmother), who is still with us. In the end, they will be buried together, an honor she earned.

As we turned to go, the Diva took her jingle-bell necklace from around her neck, and left it on the headstone. A fitting tribute for a warrior. 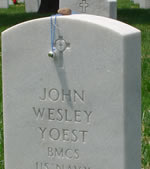 We drove back down Bradley Avenue — past a fresh grave covered by a tarp. In front of us, sparkling in the bright sunlight of a gorgeous day, stretched row after row of white marble markers, orderly, peaceful, some weathered, others new and crisply chiseled . . .

I turned to the Penta-Posse. “I want you to look,” I said. “I want you to understand, that each one of these headstones represents someone who gave their life so that you could be free.”

They were quiet and solemn. The weight of it is beyond measure.

We made the right turn onto Eisenhower. We drove slowly toward the exit, passing the drive to the Tomb of the Unknowns to our left, until we came to a crosswalk thronged with tourists. The guard on duty motioned to the crowd to stop, and we drove through, passing through the gates, back to a busy day, leaving behind — the curious crowds, the chattering school children. . . and the silent stones.

###
More on Arlington National Cemetery at the jump.

Other Memorial Day Links from years past:

Blackfive with “Opening the Gates of Heaven.”

For the almost four million people who visit annually, Arlington National Cemetery represents many different things. For some, it is a chance to walk among headstones that chronicle American history; for many, it is an opportunity to remember and honor the nation’s war heroes; and for others, it is a place to say a last farwell during funeral services for a family member or friend.

Why visit? Perhaps no other place offers such eloquent testimony to the sacrifices of American soldiers as Arlington National Cemetery. Located on the grounds of Robert E. Lee’s former plantation, Arlington was first used as a Union Army burial site during the Civil War in retaliation for Lee’s decision to forsake the U.S. Army for the southern cause. Today, more than 300,000 people are buried at Arlington, including soldiers and their spouses, past presidents, former slaves, and even recent casualties from the Iraq War.

What to see: Witness the moving “changing of the guard” ceremony at the Tomb of the Unknown Soldier, then wander along the cemetery’s paved roadways. Visit President John F. Kennedy’s gravesite with its eternal flame and the grave of his brother Robert nearby that’s adorned with a simple white cross. Then walk up the hill and tour Arlington House, the Custis-Lee mansion once owned by Robert E. Lee.

While you’re there: Washington, D.C., which should be visited at least once by every American, is just across the Potomac. Moving memorials commemorating the Vietnam, Korean and Second World wars dot the green expanse of the National Mall, along with the Lincoln Memorial, the Washington Monument, the United States Capitol and the various museums of the Smithsonian.