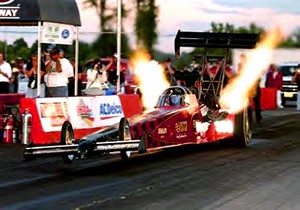 Your Business Blogger used to play an acceleration trick known among car-guys as ‘the quarter game’ in his old Corvette.

Your Business Blogger(R) in his old ’58 Vette

Here’s how the bet would work: Find a traffic-free interstate on-ramp,

Toss a quarter on the passenger side floorboards,

We would bet the quarter that he (always a ‘he’ — Girls didn’t like to play…) He could not lean down and pick up the coin as Your (law-abiding!) Business Blogger raced thru the gears. The passenger could not overcome the G’s.

I would usually win…

Or maybe ’cause the friend would be laughing so hard at my occasional — rarely — infrequent missed gear shifting.

An Alert Reader sent this along to demonstrate real G-force acceleration.

* Under full throttle, a dragster engine consumes 11.2 gallons of nitro methane per second; a fully loaded 747 consumes jet fuel at the same rate with 25% less energy being produced.

* With 3000 CFM of air being rammed in by the supercharger on overdrive, the fuel mixture is compressed into a near-solid form before ignition. Cylinders run on the verge of hydraulic lock at full throttle.

* Dual magnetos supply 44 amps to each spark plug. This is the output of an arc welder in each cylinder.

* Spark plug electrodes are totally consumed during a pass. After 1/2 way, the engine is dieseling from compression plus the glow of exhaust valves at 1400 degrees F. The engine can only be shut down by cutting the fuel flow.

* If spark momentarily fails early in the run, unburned nitro builds up in the affected cylinders and then explodes with sufficient force to blow cylinder heads off the block in pieces or split the block in half.

* Dragsters reach over 300 MPH before you have completed reading this sentence.

* In order to exceed 300 MPH in 4.5 seconds, dragsters must accelerate an average of over 4 G’s. In order to reach 200 MPH well before half-track, the launch acceleration approaches 8 G’s.

* Including the burnout, the engine must only survive 900 revolutions under load.

* THE BOTTOM LINE: Assuming all the equipment is paid off, the crew worked for free, & for once, NOTHING BLOWS UP, each run costs an estimated $1,000 per second.

Putting this all into perspective:

The only Corvette that matters today:

The Dreamer in her ‘Vette with proud dad.

I have driven both, and this — this is life in the fast lane.

Keith Black continues, “You are driving the average $140,000 Lingenfelter twin-turbo powered Corvette Z06. Over a mile up the road, a Top Fuel dragster is staged & ready to launch down a quarter-mile strip as you pass. You have the advantage of a flying start. You run the ‘Vette hard up through the gears and blast across the starting line & pass the dragster at an honest 200 MPH. The ‘tree’ goes green for both of you at that moment.

The dragster launches & starts after you. You keep your foot down hard, but you hear an incredibly brutal whine that sears your eardrums & within 3 seconds the dragster catches & passes you. He beats you to the finish line, a quarter-mile away from where you just passed him. Think about it – from a standing start, the dragster had spotted you 200 MPH & not only caught, but nearly blasted you off the road when he passed you within a mere 1320 foot long race!

Let me see if I’ve got this right. What you’re telling me is that in the space of under 2 and a half minutes of running a Top Fuel dragster (28 runs of 5 seconds each at $1,000 per second), I would have spent enough competing in the dragster to have paid for a Lingenfelter twin-turbo powered Corvette Z06 (that will run 200 mph).

Comments may not be enabled because of a nasty DoS. But please email your thoughts here.

And that’s why the proper way to do the quarter trick is to use your dad’s Chevy Nova, almost bone stock, station wagon with a dealer installed 327 and Turbo-Hydramatic. The only person I ever saw miss a gear with that car was my mom who also could fry the clutch of a stick shift without actually leaving the garage in the morning to drop my sister off at school.

My dad was not a car guy and couldn’t understand why the wagon got such terrible gas mileage and also why his teenage son didn’t seem to mind driving around in that statin wagon with that infamous puke green metallic color that Chevy loved so much. I should also mention that it had dog dish hubcaps, a sticker for the Long Beach Naval Station and a bumpersticker for the March of Dimes on it. The perfect stealth car, or rather considering this was in the 60’s, the perfect Q-ship.

Patterson lets us in on the best kept secret of acceleration: Automatic transmissions transmitted greater torque and faster shifting than any manual transmission. Even the old PowerGlide Turbo-Hydramatic could jump off the line faster than my old ‘Vette with a wide-ratio 4 speed. (Although a 4:11 rear end would have been helpful…but we’d be back to that 8 mile a gallon concern.)