January 29; The CEO Should be Able to See Over the Horizon MANAGEMENT BY THE BOOK: 365 Daily Bible Verse & One-Minute Management Lessons For The Busy Faithful

Do not conform to the pattern of this world,

but be transformed by the renewing of your mind.

his good, pleasing and perfect will.

Admiral Lockwood was not happy. The US submarine service wasn’t effective in the early days of World War II and the war might be lost if the Japanese Empire continued to control the Pacific Ocean.

Lockwood’s subs sank few enemy vessels. His captains took few risks and all the submarines would come back safe. The mission, to his boat captains, was less important than the safety of crew and equipment.

The WWII submarine vessel was a most advanced war machine. Complicated and constructed to exacting tolerances, there was little margin for error at an underwater test depth of 315 feet.

The engineering marvels were commanded by captains with engineering backgrounds who well understood the complex interaction of water and weapon, man and machine.

Engineers had a deep appreciation of the delicacy of these boats. The masterpieces had to be gently handled and deployed.

But Admiral Lockwood needed a radically new approach for his submarine force to sink enemy ships. He didn’t know exactly what — but he needed to try a new type of leader to captain the subs. A new mindset. 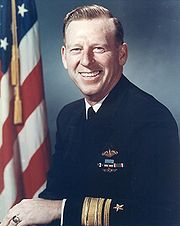 Eugene Fluckey was a competitive risk-taker and a Naval Academy graduate who rowed on the crew team. He was given command of USS Barb.

He would sink over 17 ships. He was nicknamed “Lucky Fluckey.”

How did he do it? What did he do different from other captains?

Fluckey had a different vision. Literally.

It seemed that the engineer-captains were so enamored with their machines that they avoided any danger. On patrol these risk-adverse captains would place the safety of boat and crew above the mission by patrolling under water — because it is, well, a submersible. The captain would attempt to find enemy vessels with a raised periscope from a submerged position. No enemy saw them and they saw no enemy.

Fluckey took the risk of exposing Barb by steaming on the surface and searching for targets with a raised periscope—where he could see twice as far.

His tactics were different from his fellow commanders; he did not follow the crowd. Barb would go on to sink more tonnage than any other submarine and Fluckey would earn the Congressional Medal of Honor.

As Paul writes in Romans 12:2, Do not conform to the pattern of this world, but be transformed by the renewing of your mind. Then you will be able to test and approve what God’s will is–his good, pleasing and perfect will.

Read more in:  Thunder Below!: The USS *Barb* Revolutionizes Submarine Warfare in World War II, by Admiral Eugene B. Fluckey, 1997.