Laugh at the days to come.

The Leader Makes Positive Movement For A Positive Future

His critics called him “Amiable…” 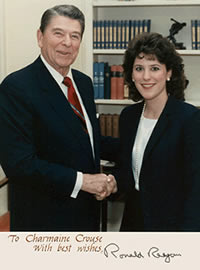 Ronald Reagan
with Charmaine Crouse
circa 1988

His critics could never figure out what made this man so sunny and so popular.  And they hated him.

It mattered not that 49 states re-elected him.

Ronald Reagan, the 40th president from 1981 to 1989 was forever smiling, positive, upbeat and compelling.  People responded.

Journalists and academia though him a dullard.  “He is wrong on all the issues,” critics would say. “And he’s just not very bright.”

The smart set sneered at the Cowboy President. How anyone be all sunshine even after the foggy overcast of the previous, nervous president, Jimmy Carter?

We now know from the Reagan Diaries published in 2009 that he wrote all his foundational material.  His geniality and unbounded optimism came from the fact that he knew that the free enterprise spirit would conquer and win-over enemies foreign and domestic.

The Reagan example for today’s CEO is to present an up-beat positive outlook for a new day.

As written in Proverbs 31:25b the optimistic president will, Laugh at the days to come because he has Faith in the present and Hope for tomorrow.