Present your case, says the LORD. Set forth your arguments, says Jacob’s King. 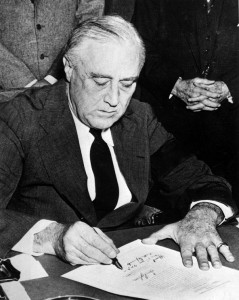 After winning his first presidential election in 1932 Franklin Delano Roosevelt met with the like-minded Socialists who worked to get him elected. The supporters had an agenda, something to sell to the incoming administration. And FDR was excited about the numerous proposals and was eager to get started implementing his New Deal. Roosevelt worked to get off to a fast start in confronting the Great Depression using relief, recovery and reform.

During FDR’s first 100 days Congress approved his every request.

How did he do this?

Roosevelt was expert in the exercise of influence. And not just his projection but also in his demanding to be persuaded, “Now make me do it.” He asked to be ‘sold’ on a course of action. He expected the best possible debate and argument and recommendations.

This sounds much like Isaiah 41:21, Present your case, says the LORD. Set forth your arguments, says Jacob’s King.

It is the responsibility of the president to get the best possible advice in the crafting and implementing policy. However, the president does not have to ‘buy’ anything presented to him. FDR was insisting that the initiatives had to be ‘sold’ to him in such a compelling fashion that the president would have little choice but to adopt the proposal.

The president was looking for good policies and the frameworks that would link together competing interests in government and the private sector. Win-win-win solutions using limited resources with an obvious course of action.

Not all agree on FDR’s results but all acknowledge his ability to get things done through the thinking support of others.