March 26; A Hand-off Without Fumble, Transferred Successfully, Is a Joy To Marvel MANAGEMENT BY THE BOOK: 365 Daily Bible Verse & One-Minute Management Lessons For The Busy Faithful

to the one who sends him; he refreshes the spirit of his master. 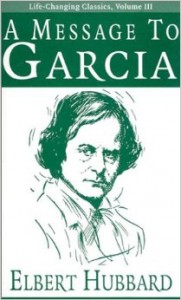 A Message to Garcia

It sold over 40 million copies in 37 languages and was made into two movies.

Originally published in 1899, by Elbert Hubbard, this edited classic is relevant even in these more modern times.

This is a timeless case study on management delegation, staffer initiative, completed staff work and execution.

A Message to Garcia, By Elbert Hubbard,

When war broke out between Spain & the United States, it was necessary to communicate with [Garcia the] leader of the Insurgents. [He] was somewhere in the mountain vastness of Cuba- no one knew where. No mail nor telegraph message could reach him. The President must secure his cooperation, and quickly.

Some one said to the President, “There’s a fellow by the name of Rowan will find Garcia for you, if anybody can.”

Rowan was sent for and given a letter to be delivered to Garcia. “The fellow by the name of Rowan” took the letter…disappeared into the jungle, and in three weeks came out on the other side of the Island, having traversed a hostile country on foot, and delivered his letter to Garcia.

The point I wish to make is this: [President] McKinley gave Rowan a letter to be delivered to Garcia; Rowan took the letter and did not ask…any idiotic questions…

[Garcia’s] statue [should be] placed in every college of the land. It is not book-learning young men need, nor instruction about this and that, but a stiffening of the vertebrae which will cause them to be loyal to a trust, to act promptly, concentrate their energies: do the thing- “Carry a message to Garcia!”

No man, who has endeavored to carry out an enterprise where many hands were needed, but has been well nigh appalled at times by the imbecility of the average man- the inability or unwillingness to concentrate on a thing and do it…God in His goodness performs a miracle, and sends him an Angel of Light for an assistant.

Self-interest prompts every employer to keep the best- those who can carry a message to Garcia.

Civilization is one long anxious search for just such individuals. Anything such a man asks shall be granted; his kind is so rare that no employer can afford to let him go. He is wanted in every city, town and village- in every office, shop, store and factory. The world cries out for such: he is needed, and needed badly- the man who can carry a message to Garcia.

Like a snow-cooled drink at harvest time is a trustworthy messenger to the one who sends him; he refreshes the spirit of his master. Proverbs 25:13.