May 9; Getting Knocked Down In Defeat Is The Best Way Up To Success; MANAGEMENT BY THE BOOK: 365 Daily Bible Verse & One-Minute Management Lessons For The Busy Faithful

Therefore, in order to keep me from becoming conceited,

I was given a thorn in my flesh,

a messenger of Satan, to torment me.

The hiring manager at a start-up venture is looking for sales guys. “Why should I hire you?” the job applicant asked.

The candidate says, “I want to win. I know how to take a measured risk under the pressure of public accountability and scrutiny. (And losing — is just not fun…)” 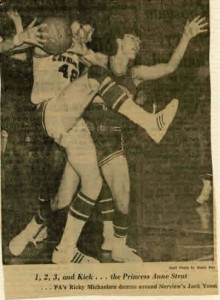 Your Business Professor
on Right (without the ball)

Promises are easy to make by a job seeker. So how did Your Business Professor discern if a candidate had character and persistence?

How did the candidate handle public humiliation?

Back in high school (yes, all of life begins there) Your Business Professor played basketball. One day my dad comes home standing tall and smiling. His has the local newspaper in his hand folded open to the sports section with last night’s basketball game.

It plainly depicts a very talented player (not me) “dancing around” a bewildered, out-maneuvered defender (me). I use direct quotes because that was the caption under the very large picture.

Really good sports photographers can capture such a picture, a mortifying moment. The Agony of Defeat.

But my dad was still proud. Parents are strange like that.

Oh. I guess. I go off looking for my missing jock-strap of which I got faked out of.

Yes, a successful track record is necessary to observe what the candidate has accomplished. But how do we know if he really learned anything? And how can we evaluate his character?

From the candidate’s well documented wins? Or his hidden losses? We have an example from the world’s bloodiest contact sport: politics.

Ed Rollins is the political genius who engineered Ron Reagan’s re-election campaign. Rollins’ younger days were spent in the controlled violence of boxing where we learn of his character formation. “It taught me how to live with pain…I also learned that quitting is never an option.” Ed Rollins won 164 fights in his boxing career, “but they are all a blur…but I remember every detail…every punch…every mistake—of my two losses.” The two losses seem to be pivotal in his education and they kept him humble.

We take pride in our wins. But learn from our losses. Look for life-changing mistakes and failures in the job applicant.

…seem not to live as gracefully with defeat, humiliation, or self-betrayal, they seem less conscious of their own complicity in weakness–in other words, with their own sense of being sinners. They pretend more. They have been defeated less.

Novak quotes the late Maurice B. Mitchell, former chairman of National Public Radio and chancellor of the University of Denver,

Not enough young men and women who come to a university have ever had a punch in the nose, not enough …involved in contact sports…I think it would be good for us if we had some of those participant activities where everybody gains a sense of his own physical feelings–what it feels like to hurt a little, what it feels like …to get caught, or to lose.

Yes, Ed Rollins had a track record of 164 wins. But I’ll bet his two defeats are what got him hired.

Paul in II Corinthians 12:7b tells of the benefit of this pain, Therefore, in order to keep me from becoming conceited, I was given a thorn in my flesh, a messenger of Satan, to torment me.