May 21; High Fashion And Management Style; MANAGEMENT BY THE BOOK: 365 Daily Bible Verse & One-Minute Management Lessons For The Busy Faithful

Let us then approach God’s throne of grace with confidence,

so that we may receive mercy and

find grace to help us in our time of need. 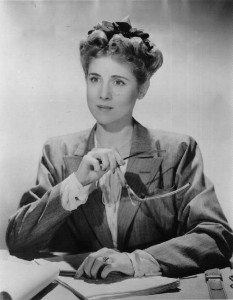 Men found her irresistible. She was a two-term congresswoman.

Ronald Reagan would award her the highest civilian honor, the Presidential Medal of Freedom.

She was the first woman to receive the Sylvanus Thayer Award by the United States Military Academy for “Duty, Honor, Country.”

There were Clare Boothe Luce lovers and detractors. Playwright Irwin Shaw said she was, “feminine as a meat axe.”

She would get any job she wanted; she had a “Rage for Fame” a biographer wrote. She married Henry R. Luce, the publisher of Time, Life, Sports Illustrated and Fortune.

Mr. Luce has been described as “the most influential private citizen in the America of his day.” She would write The Women, the Broadway hit play in 1936 and later a Hollywood movie. Clare Boothe Luce would become managing editor of Vanity Fair.

But all this would be in her future. The world would get a hint of her boldness in how she approached her first big job.

Clare was in her twenties and decided to work for the last word in fashion, Vogue magazine. She interviewed with the editor-in-chief who then left town on an extended trip. Clare had not heard back from the decision maker, but she,

was still determined to work at Vogue. So after Labor Day she put on a gray dress with white collar and cuffs, went to the Graybar Building, and persuaded an assistant that she was a new employee.

She took a seat at an empty desk in the editorial department and waited for some work to arrive. After a while it did. “I kind of oozed on,” she recalled. “Nobody knew anything about me, not even the accountant.”

When the decision maker returned and “found Clare in place, looking both businesslike and elegant, she assumed Condé [Montrose Nast] had hired her. He, in turn, thought she had.” Her immediate supervisor thought the owner, Nast, made the hire. Nast thought the supervisor hired Clare.

The Vogue leadership didn’t get a chance to think about the mix-up much as Clare began writing clever captions, “No good deed goes unpunished,” and “Widowhood is a fringe benefit of marriage.”

This is not a recommendation on how to use deception to get an entry-level job. Today, an internship and networking would be the acceptable approaches. But Clare’s example of a confident attitude shows us how to step up to earthly powers. Her track record would show, as the human resource hiring experts look for, ‘increasing levels of responsibility.’ She would move from office politics to international politics.

President Eisenhower appointed her as Ambassador to Italy. This created more controversy. Not because she was the first female in this high diplomatic post but because of her continued boldness.

In her 40s Clare Boothe Luce converted to Catholicism and, as with anything she did, was not shy about her faith.

The unknown writer of Hebrews, possibly Paul, writes in 4:16, Let us then approach God’s throne of grace with confidence, so that we may receive mercy and find grace to help us in our time of need.

There are few earthly needs as great as needing to earn our daily bread by finding a job or finding the talent to get the job done. We are to pray with confidence to our Creator. Bible scholar, Dr. Yeager, explains,

He wants to help us. Let us go to Him. How? With boldness. Where? To the throne of grace. Why and with what result? To seek and find mercy and grace. For what purpose? To receive the help when we need it most. Thus we have a practical religion.

Clare Booth Luce died in 1987 and is buried next to her husband, Henry, in Mepkin Abbey– a property they donated a community of Trappist Monks in South Carolina. We can assume that she approached, or let us say, she went respectfully Vogue-ing to the throne boldly.