June 14; It Is Your Career Responsibility To Find A Fit MANAGEMENT BY THE BOOK: 365 Daily Bible Verse & One-Minute Management Lessons For The Busy Faithful

If anyone will not welcome you or listen to your words,

leave that home or town and

shake the dust off your feet. 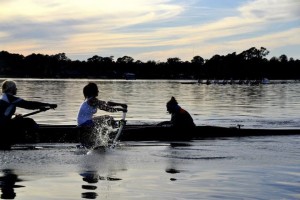 The athlete had been training for years for this competition. Then he jumped ship. The crew was rowing their thin shell in a race and the team was pulling hard on the oars. An oar broke.

In the days of yore the oar was made of wood and would bend and break; the broken oar would be fished from the water and proudly displayed as a trophy by the oar-breaking oarsman.

Oars break less today due to nearly indestructible composite material. But they still crack up occasionally and ejecting is in the back of every competitor’s mind. An oarsman minus the oar is deadweight slowing the shell. No value is added, indeed, value is added by the rower’s removal.

The team will stop rowing. The rower with the broken oar will jump off.

Spectators along the banks of the regatta’s course have been known to break out in cheer for the man who jumped overboard.

Every person will reach a point in a career where there will not be a fit between the skills demanded by the job and what value the employee can deliver. The answer to this question is marked-off in another race–between the employee and his manager: Who will notice first?

It is best if the individual discovers his shortcomings before his manager. The self-aware worker will notice—better notice—before anyone else that there are some tasks beyond the current expertise. Get the training needed. Or move to another job in the company. But if no fit is found, then be prepared to jump ship before you are thrown overboard. Leave on your own terms.

As Jack Welch would say, “Don’t be a victim.” Be in control of your own career. Remember, it is not the person, not the employee who is rejected but his work. Leave and jump off before you are fired.

If anyone will not welcome you or listen to your words, leave that home or town and shake the dust off your feet. Matthew 10:14

*Command issued by a jet pilot to leave an aircraft in flight. There is a one-in-three chance of a broken back caused by the explosive force of blowing the seat and pilot out of the jet. The alternative—death—is 100%. The better option is to vacate the venue.