Charmaine and I were ecstatic. Our son, The Dude, won a small part as Thomas Jefferson’s grandson for a movie. When we told our 4-year-old little guy about his new role, he started to tear up.

The Dude cried, “But I don’t want to be in someone else’s family!”

We were surprised, “No, Dude, it’s pretend. You’ll always be our boy…”

Charmaine and I attempted to reassure. Told him it was good. But the little Dude was convinced that he was being placed into a new family.

And it was true. And this would serve a purpose. He would pretend to be something he wasn’t. But we’ve always taught him never to deceive.

But this was, well, Hollywood.

This is marketing. This is different.

Charmaine and Jack Yoest on set.

And this is what Business Pundit by Rob May wrote about in Lying, Marketing and Perception. Rob was a winner in the 2005 Marketing SuperStar Awards.

Rob May at Business Pundit has

Rob’s article and analysis speaks to our sight and sound generation.

Rob reminds us that:

…our reality is determined as much by what happens in our heads as what happens external to them. In other words, perception is reality.

The Dude really thought he was leaving our family. Goodness, we even told him so. It was true. But it wasn’t, really.

And that is what Seth Godin means when calls marketers liars. By believing the lie, it becomes true.

So our little Dude believed the lie and it became true. His portrayal became a truth.

So the point Seth was trying to make is this. If you create a product that is targeted towards people with a certain worldview, and you tell them a story about that product that may be, in one sense, a lie, you will change their perceptions so that the lie is now a truth. And that will make their lives better. Yes it’s complex and paradoxical, but it doesn’t disrespect customers and it isn’t unethical.

The Dude’s acting served a good, and the presentation was true.

The Dude on set

People have been doing this forever, Seth just pointed it out to the world. If you believe crystals have healing power and you buy them and wear them, they will probably help you heal. If you believe a magnetic bracelet will ease your pain, it probably will. Perception will become reality. If you are a marketer, your job is to help people perceive your product in a certain way, so that it will become a reality to them.

So The Dude was doing something good. His reality was that he was part of another family. And it became true.

And his performance was beautiful.

Aristotle would be pleased. 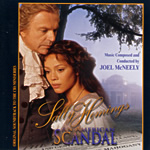 Jack and Charmaine also blog at Reasoned Audacity and at Management Training of DC, LLC.

The Dude’s movie was the CBS miniseries, Sally Hemings, An American Scandal, February, 2000.