Just after 9am on 9.11, I was doing what all business owners were doing: selling something. I was on the phone with a client. Making a pitch to attend a series of seminars, with CNN on in the background. I was a bit distracted by the live feed of a burning building.

While making ‘the ask,’ it was clear that my customer was not aware that we had just been attacked. I wanted to say something, like, Turn on your TV and stare at real pain. It just didn’t look real. I continued instead with the conversation. Your Business Blogger is not normally so focused. In denial, perhaps. Disasters are not normally good for business.

There was work to be done. My next class was on September 19.

And I didn’t want the customer on the other end of the phone distracted until the sale was closed. Then we could go to war.

The deal done, I noticed my boy, The Dude, was concerned that the attacks would continue down to us in Charlottesville, Virginia. “We got to get ready!” he shouts and scampers around digging up my old uniform, boots, saber and his grandfather’s bayonet. (Old soldiers never die, they just file away. Apologies to MacArthur.)

The Dude spent the rest of the morning marching outside our front door. Looking out for terrorists. It must have worked.

Charlottesville was not attacked.

But we were affected. Everyone was. But I wasn’t sure that the bank was going to delay getting their money over a pesky act of war. I still had to earn a living.

How would the war affect business? Not the macro, but mine? I had a seminar and clients coming into town in little over a week and the world was on fire. Would anyone show up? Would anyone care?

We North Americans do business like we do war. We win. Donald Trump becomes Victor Davis Hanson. At 8 am on 19 September 2001, 86 professionals showed up and got down to business. A packed room.

Even my business partner, Faisal Alam, came down from New York City to join us. He is Muslim.

The country was mourning, but on the move.

I started with a minute of silence in remembrance of those lost in the World Trade Towers.

Then we all got back to work. Each making the world a better place. Even with a war on. 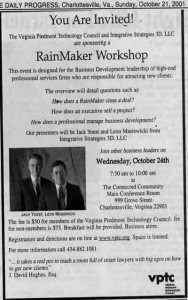