Charmaine Quoted in PatriotPost, The Enthusiasm Gap And Chuck Norris

Baby Boo in the Huckabee Iowa

Working hard for the mommyCharmaine’s article in NRO was exerted in the PatriotPost; The Conservative Journal of Record, today.

She wrote about the Enthusiasm Gap between McCain and the base that turned out for Huckabee.

“The problem the GOP faces right now is that they never have understood the political significance of Mike Huckabee’s extraordinary candidacy and electoral buoyancy… Mike Huckabee offered a voice for a significant portion of the electorate that feels disenfranchised.

Unfortunately for the GOP, the synonym for this group is ‘their base.’ “ 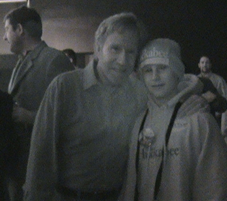 Chuck Norris and The Dude

“So what’s he like?” classmates would ask The Dude. “Chuck Norris is so cool,” The Dude says.

The math teacher is pretending not to listen.

“Chuck Norris can divide by zero.”

Even the teacher laughed.

Charmaine served as senior advisor to the Mike Huckabee for President campaign.